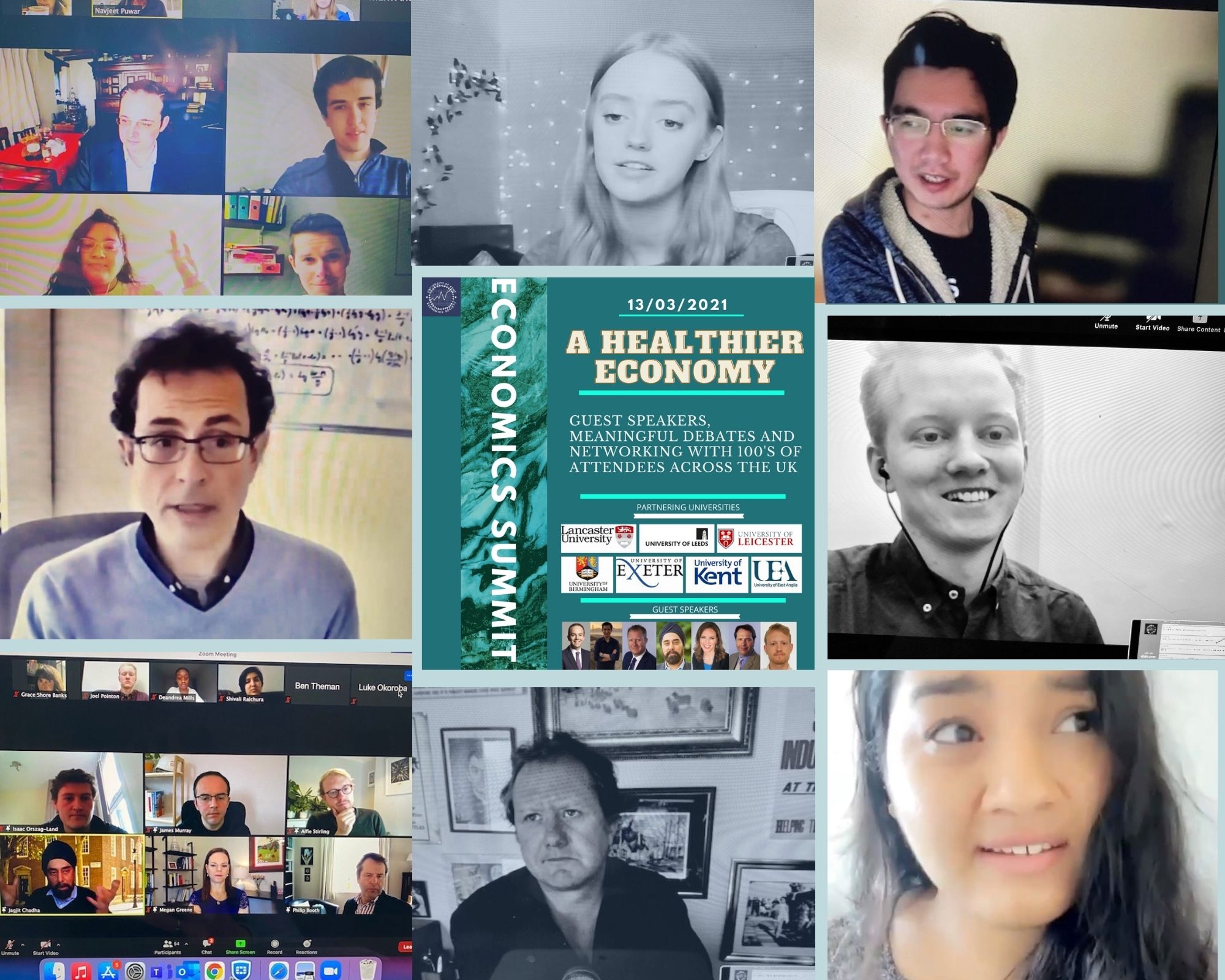 ‘Despite COVID-19 restrictions preventing us from holding the Economics Summit in its usual form, we were able to adapt and host a bigger and better virtual event.’ Society Committee Member Shivali Raichura blogs about the highlights of this inspiring and successful event.

On the 13th March 2021, the Economics Society at Kent held their third annual Economics Summit: “A Healthier Economy”. Co-hosted by Economics Societies from UEA, Lancaster, Leeds, Leicester, Birmingham and Exeter Universities, the first time we had collaborated with partnering universities, and it was an insightful and thought-provoking event that I know I will remember in years to come.

“To make this year’s summit bigger and better than before, we decided to invite other universities to join us.” Joel Pointon, President of the Economics Society explains, “They supported the planning of the event, helping to decide the sessions to run, helped to secure speakers, and advertise the event to their members. It was something which was unique to an online summit, which we are very glad to have done – it enabled us to network with students from across the UK, and benefit from their contributions. Although, moving back to an in-person summit next year might render the collaborations impossible – but I am sure that the connections will last, and next year’s committee will look to work with the other societies to host virtual events together in the coming years.”

The day began with a talk on the effect of AI on the Economy, led by Stephan Zheng, a lead research scientist covered in the Financial Times. He gave us a fascinating talk wherein he showed us various developments in the simulation of a market economy. I find machine learning particularly interesting and definitely appreciated his tips at the end for becoming an AI Economist.

After a short break we heard from Chris Snowdown, the Head of Lifestyle Economics at the IEA. This was my favourite session of the day, and we had so many questions that we had to extend the Q&A! With the ongoing pandemic, it was easy to understand the importance of analysing health in economics. The conundrum of whether an ageing population was costing us more and how to combat this was something that especially stuck with me and I later discussed this with my non-economist housemates who found it fascinating.

The students vs academics debate was a highly anticipated session, with the controversial question: “Would the economy benefit from mandated veganism?”. Strictly limited to the economic arguments, the students did a great job arguing in favour but were ultimately beaten by the academics who argued against the mandating of veganism. Both sides argued eloquently, and I found the level of research undertaken to be especially impressive.

Our Careers Officer, Richel, organised a successful networking session, bringing together students from Universities all over the country. It was a great chance to work on an elevator pitch as we had limited time in each breakout room to meet as many people as possible; I was able to build up my LinkedIn network and gain valuable advice from students in the years above me.

To wrap up the day, we heard from a panel of experts on the state of the UK economy, in 2021 and beyond. Jagjit Chadha (NIESR), James Murray (Senior MP), Phillip Booth (IEA), Megan Greene (Financial Times) and Alfie Stirling (NEF) answered questions on the recent budget, the situation in the UK compared to the USA and much more.

Despite COVID-19 restrictions preventing us from holding the Economics Summit in its usual form, we were able to adapt and host a bigger and better virtual event.