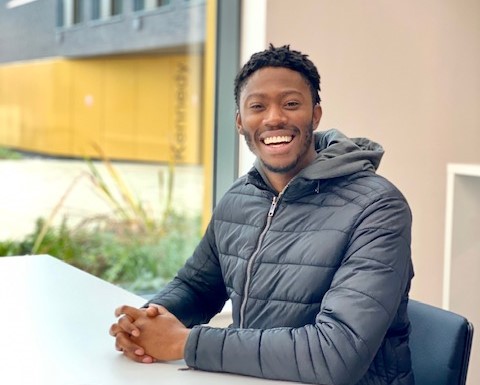 “In July 2015 I realised a dream, I became a graduate. Following three long years of study, tears and hard work I graduated from the University of Kent with a 2:1 in BSc Financial Economics. My feeling of gratitude and joy were only strengthened by the graduate role I had secured at Santander UK to begin in September of that year – I had spent a twelve-week internship there between my second and third year.

Over the course of the next five years I took the stereotypical route of most graduates, developing various skills and taking on roles to advance my career and job prospects. I originally joined Santander on the risk graduate programme, following the completion of four six–month rotations in credit, operational, market and valuation risk, and I secured a role in the corporate bank working in Trade Finance. My risk background assisted me in analysing trade deals and supporting the financial crime elements of my role. From this role I became a project manager within a central division, reviewing and redesigning key strategic programmes across the organisation. Over the course of my five years at Santander, my roles were quite varied and dynamic, but Covid-19 helped me reprioritise how I wanted to spend my time.

I had become disillusioned with my role and the organisation I was working for several months before leaving because I felt like I was merely counting the days, not making the days count by doing something I felt I could excel in. This opportunity served as a moment in time for me to do something that could help lay the foundation of change in my life.

I decided I wanted a role that required me to build relationships with a strong focus on financial sales targets, so I needed a new job. I had previously tried to move internally but found it difficult to move into the division I wanted with the experience and academic background I had. So I decided to quit and complete an MSc in Financial Economics at the University of Kent, with a view to pivot my career. Other than the financial constraints imposed by not having a monthly income, there were no other major drawbacks to pursing this path.

Between my savings, the room I rent out in my house and student finance I was confident I could make just about enough money to complete my university exams in May 2021 and then find a full-time job. Was I scared? Sure. Did my parents suggest I did my Master’s part-time? Of course. But I was willing to take the risk. Fortune favours the brave!

Deciding to return to academia was not a reflection of my efforts to increase my earning potential but more so to pursue an opportunity I had never really considered previously, after all I had secured a role immediately after my undergrad. Further education does not guarantee me a job, especially in the current job market, but it does make me more qualified and widens my career opportunities at a time when I am looking to do something slightly different. I believe my work experience, combined with a Master’s degree, strongly signals my ability to be agile in an ever-evolving economy, while the break from the working world has and continues to give me opportunity to reflect, replan and refocus.

I applied for four different institutions to do my Master’s and decided to return to Kent given my responses and financial constraints. With no grant and high living expenses, the choices of institutions become clearer when prices for similar degrees can range from £8k to £30k. Further study in an area I previously had knowledge and experience of made logical sense. While at Santander my colleagues were often impressed by my undergraduate degree, this led me to believe a Master’s degree in the same field would prove advantageous. Open to other industries and roles, I felt like the potential opportunities following the completion of my degree were endless, from finance to government, sales to research, the value of an MSc in Financial Economics from the University of Kent should help open new doors.”

Toluwalope Shomoye is currently studying for his MSc in Financial Economics at Kent.

Further details about all our Master’s programmes in Economics can be found on our website.