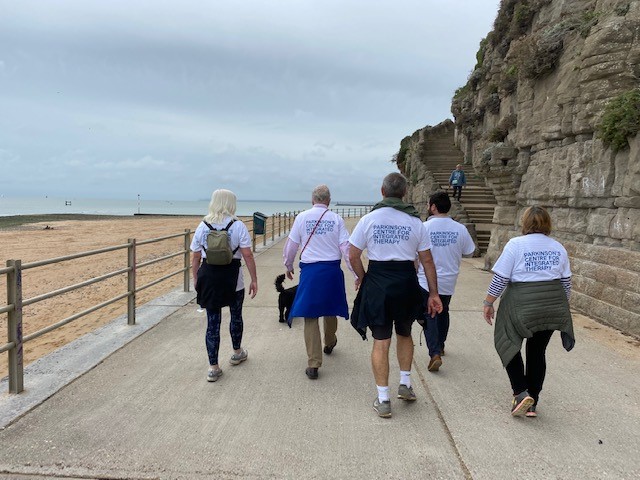 We are deeply grateful to everyone who took part in a coastal walk organised by our supporters Peter Roger and Francis Ball on Sunday 2nd October to raise money for the Parkinson’s Centre for Integrated Therapy.   The team have raised an incredible £1,700 so far and there’s still time to sponsor them online!

15 people took part in an 8 mile walk from Kingsgate to Ramsgate including 10 year old Bella and her two friends, who were walking in memory of her Great Grandma. The event organisers, Peter and Francis, are both living with Parkinson’s and after hearing about our plans to open the Centre they decided to do what they could to support our vision. Peter explains:

“Supported all the way by our two wives, Brenda and Theresa, we decided that one way of helping would be to organise a walk to get interested people together and to raise funds. Despite a few challenges, our friends got behind us and everything came together for a successful walk on Sunday.

In particular, I would like to give heartfelt thanks to three young ladies who all completed the course and who were, for everyone, the stars of the show. One of the three, Bella, whose great grandma had Parkinson’s and who passed away this August, raised a magnificent £400. Everyone was impressed by how wonderful these three young people were and what an example of good manners and kindness they showed.

We also had the fantastic support of Thorley Taverns who have a large number of Public Houses, particularly in Thanet, so a very big thank you to Phillip and his fantastic staff.

Inspired by the success of this Sunday’s walk and the fantastic support from everyone involved we are now planning to follow up with another fundraising walk in the Spring.”

The Parkinson’s Centre for Integrated Therapy Team enjoyed this wonderful opportunity to connect with members of the community whose families have been affected by Parkinson’s disease and once again we are most grateful to them for their support.