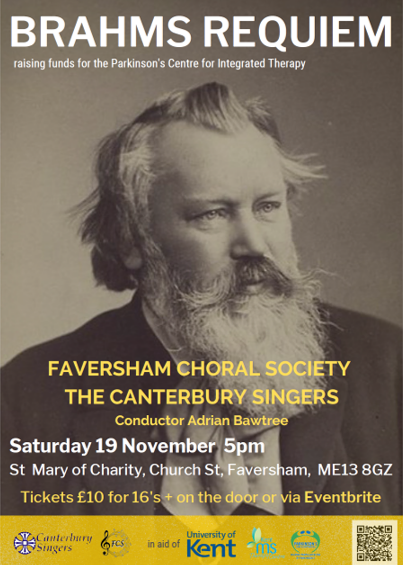 Please join us for a musical concert in aid of the Parkinson’s Centre for Integrated Therapy. The concert will take place on Saturday 19th November at 5pm in Faversham. Tickets can be purchased beforehand or on the door and the proceeds will help support the Centre.

The concert is being organised by Stephanie Wolfe and will be conducted by Adrian Bawtree who are both passionate about supporting people to live well with Parkinson’s for longer. We are very grateful for their support and hope to see many of you at the concert.

Stephanie said: “My father, Alan Binder, died on December 24th 2021 after a long battle with Parkinson’s having been diagnosed in 2008. He had always been a very active person having rowed at Oxford University and being throughout his life a cunning and skilful tennis player. He and my mother walked several long distance footpaths up until 2012 when that kind of exercise became impossible.

Before retirement he worked for Shell all over the world from Argentina to Cambodia. He faced his long battle with Parkinson’s with his typical stoicism and humour. When reduced to relying upon a walker, he made sure he got one which allowed him to balance a gin and tonic and a cigar.

As a family it was very difficult witnessing his long battle with the disease as it robbed him of movement and eventually speech.

After he died, my husband Simon and I who are keen Choral singers decided to sponsor a concert to honour him and all other Parkinson’s sufferers. Adrian Bawtree agreed to conduct it and we settled on the Brahms Requiem as that was my mother’s favourite work. The tickets are priced at a very reasonable £10 for people aged 16 and over (with a retiring collection afterwards for anyone who wants to be more generous). The concert is in St Mary of Charity Faversham on November 19th at 5pm and it would be marvellous to fill the church. All profits from the concert are going to the new centre in Canterbury. Come and enjoy an inspiring and moving major choral work in aid of a great cause.”

We would like to thank Stephanie and her family for supporting the Centre in this way.