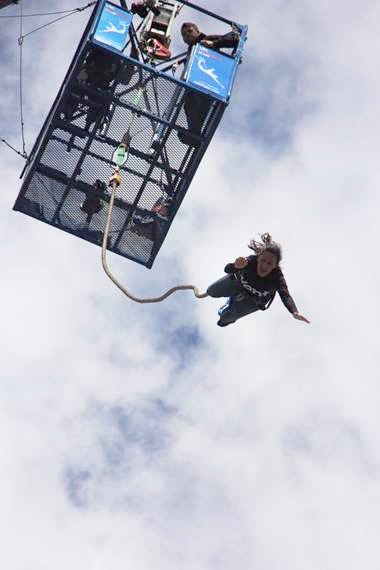 The 160ft crane bungee jump, organised by UK Bungee Club, took place at the O2 Arena in London. Natalie was one of three Campaign supporters taking part; however Natalie completed a solo jump which took courage when facing the height at the top of the crane! To date she has raised a fantastic £325.00 for the Campaign. There is still time to show you support and congratulate Natalie on her JustGiving page: www.justgiving.com/Natalie-Salunke/.

Of the jump, she says: “So the day finally came when I was expecting to throw myself from 160 ft, on my own, with only a rope attached! I have to say, it was much more terrifying than I thought, and I nearly didn’t do it, but telling myself that it was for a good cause and would be over in a matter of seconds made me jump – all in aid of the Kent Law Campaign and the YAG’s fundraising target.”

Natalie has risen over £7.5k for the Kent Law Campaign by taking part in a variety of challenges ranging from abseiling down the ArcelorMittal Orbit to skydiving; now she can add bungee jumping to her list! We would like to say a huge thank you to Natalie for her dedication, time and support she has shown to the Campaign over the years.