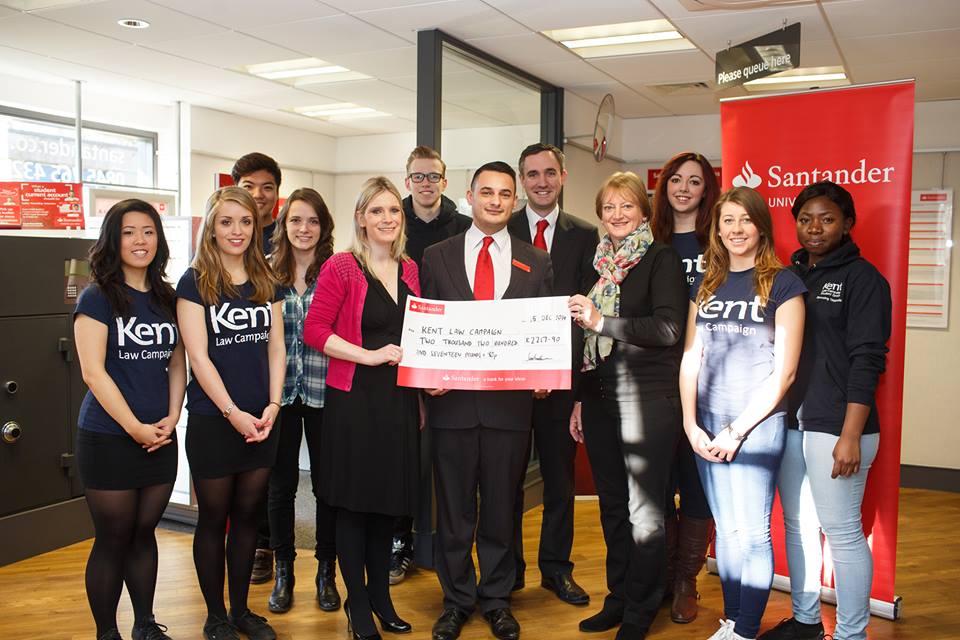 On behalf of the University of Kent we would like to express our most sincere thanks to Santander UK for donating £2,217.90 towards the Kent Law Campaign through their Staff Matched Donation Scheme.

Throughout the Autumn Term, Adam Baker and Sam Winstanley from the campus branch of the bank have become heavily involved with the Kent Law Campaign and have taken part in various events organised by the Kent Law Campaign Student Group. Adam acted as quiz master at the freshers’ quiz, Sam dressed as the Kent Bunny (the University’s 50th anniversary mascot) at the 5km fun run, they both sold tickets for the fun run and season’s greetings cards and in addition Sam even took part in a sponsored skydive!

It was through this involvement that Santander UK agreed to reward their dedication by matching everything they helped the students to raise.

Sam said: “Santander Universities is committed to supporting higher education globally and the University of Kent branch’s involvement with the Kent Law Campaign is a great example of how we can support both staff and students. Over the past year we have taken part in a number of events organised by the Kent Law Campaign Student Group and hope to continue our involvement with them throughout the remainder of the Campaign.”

Hilary Edridge (Head of Campaigns), Anna Pollard (Campaigns Manager) and members of the Kent Law Campaign Student Group were delighted to receive a giant cheque from Adam and Sam on Monday 15th December. Including the University’s match their generosity becomes £4,435.80 towards our vital work.