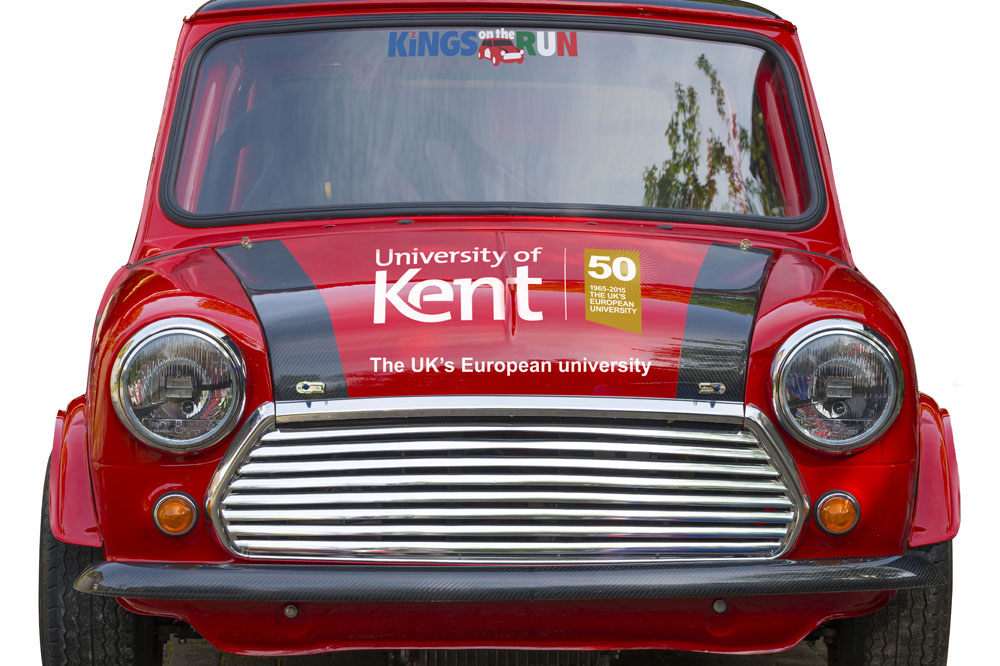 Publishing Officer Pat King is setting off on a 3,000-mile charity car rally – with a helping hand from Kent.

As part of its 50th anniversary celebrations, the University is supporting a number of staff and student initiatives, including Pat’s involvement in The Italian Job rally in October. Pat, based in Enrolment Management Services, and her husband Stephen will be competing as Kings on the Run in their 1971 classic rally Mini, which Stephen is painstakingly rebuilding from scratch.

Kent prides itself on being the UK’s European university, so it is fitting that the eye-catching, Kent-liveried Mini will drive through France, Belgium and Germany to Italy where the rally begins in Trento on October 24. The rally stages explore the mountain roads of Piedmont and Trentino, together with a few laps of the Monza race circuit and, of course, the city of Turin.

This year is the 25th anniversary of the rally which to date has raised more than £2m for Variety, supporting sick, disabled and disadvantaged children in the UK. Pat and Stephen have raised almost £2,000 for the charity (they are paying all their own expenses so any money raised goes directly to Variety).

To boost their funds, a special screening of The Italian Job, the 1969 classic crime caper starring Michael Caine, will be showing at the Gulbenkian on Thursday 2 October at 7pm. The Gulbenkian is donating a portion of every ticket sold, after costs, to Variety – you can book your seat online now. You can also donate via Pat and Stephen’s Just Giving site.