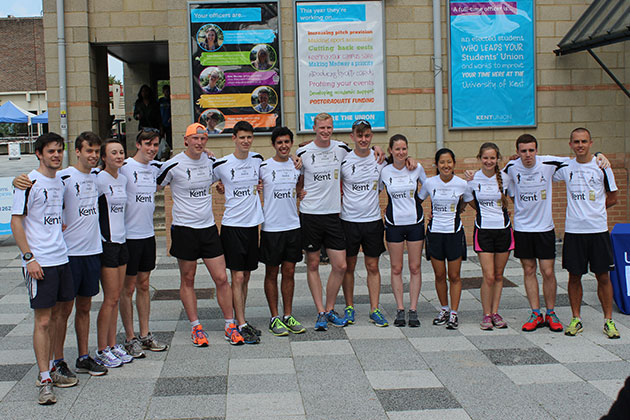 At the end of next week, a team of students from the University’s Athletics and Cross Country Club will run 200 miles from the University of Kent’s Canterbury campus to the University’s Paris centre in Montparnasse. The Campus2Campus run will see fourteen runners set off on 13 June 2014 and run over 26 miles a day for eight consecutive days – the equivalent of over eight marathons!

In addition to raising awareness of the University’s 50th anniversary and showcasing the wealth of sporting talent in our University sports teams, the group also want to raise £10,000 for the Kent-based charity, Pilgrims Hospice. We are delighted to be supporting them, and will be hosting a send-off event in Canterbury on Friday 13 June.

The team will arrive in Paris on Friday 20 June and have their photos taken at the Eiffel Tower, and staff from the Paris centre, as well as the University’s Development Office, will be there to welcome them as they arrive at Reid Hall, Kent’s Paris postgraduate study centre. To support the team and celebrate their achievement, we will be hosting an informal alumni event in Paris on Friday 20 June, and we’re looking forward to meeting with our alumni and friends in Paris!