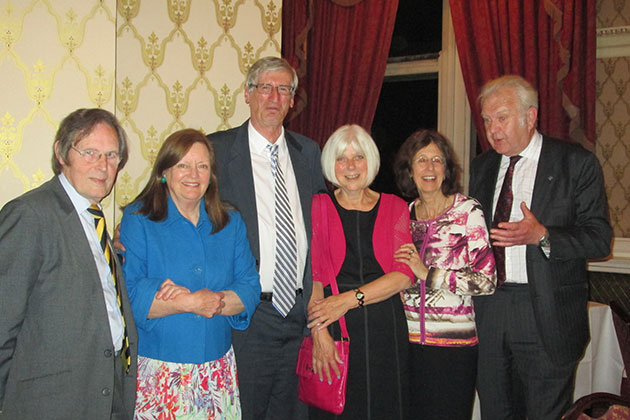 The 2014 ‘First 500 Dinner’ took place on Thursday 15th May at the National Liberal Club in London.

There were, in fact, not 500 of them; the actual number was closer to 400. However, there was a play at the Marlowe Theatre that October called ‘The First 500’ and the name stuck. They were the first residents of Eliot College, with half moving over to the newly-built Rutherford College in 1966, so that the year groups were spread out evenly across the two colleges.

The group, comprising Kent’s first undergraduates from 1965, meet every year in London. Hosted by Group Captain John Platt (Rutherford 1965, Economics), around 30 members of the original cohort come together to reminisce, to share their memories of Kent and to catch up on the latest news from the University.

We were delighted to be able to share the latest news from the University, and to show them a film which had been made during the preceding year, featuring interviews with them about their own memories, interspersed with archive footage from the newly-built campus.

The First 500 were our pioneers, and are justifiably proud of their long association with the University. We are hugely grateful for their support over the past 50 years, and look forward to giving them a central role in the 50th anniversary celebrations.