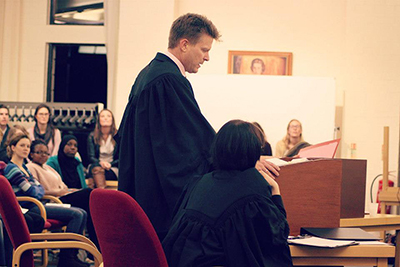 On the 17th October 2012 Kent Law Temple Society held their first annual Lecturers’ Moot. The event was designed to give students a first-hand experience of what mooting entails and to showcase some exemplary examples of mooting from Kent Law School staff.

The problem question concerned a contentious area of criminal law and involved a doctor’s withdrawal of life support from a severely premature baby in the hopes of benefiting a more viable premature baby. At the court of first instance the Doctor had been convicted of murder but appealed on the grounds that the trial judge did not direct the jury to consider the defences of necessity and causation.

After well-reasoned and creative arguments from both sides, the judges left the courtroom to consider their verdict. It was found that the appellants (Laleng and Conway) had sufficiently demonstrated that the judge’s direction was incorrect thereby making the conviction unsafe. Matthew Gaunt delivered the verdict and ordered a retrial.

Following the verdict, there was left the question of ‘Best Mooter’. Due to the impressive advocacy of all competitors, this question warranted more deliberation than the law itself. Matt Lawson delivered the decision and noted that Per Laleng’s authoritative rebuttal had won the approval of the bench and he was therefore awarded the (soon to be prestigious) engraved silver gavel.

The event was a great success drawing in a huge turnout of engaged students and also giving Kent Law Campaign an opportunity to raise funds for the new Law Clinic and Mooting Chambers.