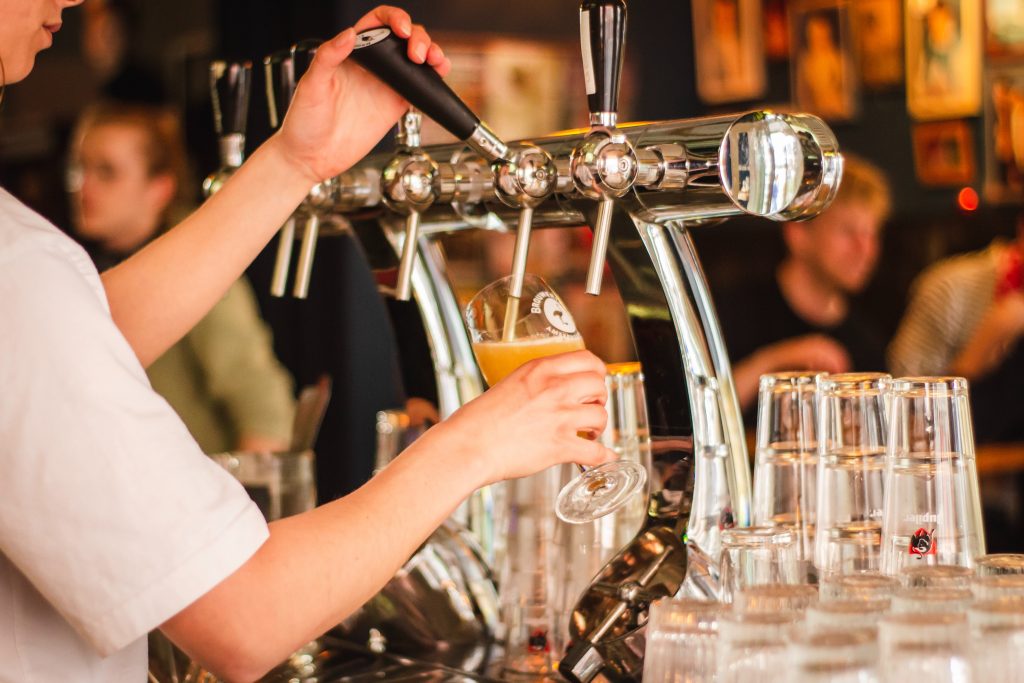 A few weeks ago, the Irish Parliament (Oireachtas) enacted further ‘emergency’ criminal justice legislation in response to the COVID crisis. The measures, in the Criminal Justice (Enforcement Powers) (COVID-19) Act 2020, are targeted narrowly at enforcing compliance with penal regulations affecting the operation of premises licensed to serve intoxicating liquor. Superficially, they may appear functional and reasonable in helping to combat the spread of the virus. Beneath the surface, however, as with so many of the ‘emergency’ COVID measures, their contents and manner of enactment reflect the mentality of a police State.

In responding to the pandemic, Ireland had taken a particularly tough approach to the closure of premises licensed to sell intoxicating liquor. All pubs were required to close in mid March. From the end of June, pubs serving food were permitted to admit and serve customers again, but only where each customer also ordered and was served a substantial meal costing at least €9. Additional restrictions (penal and otherwise) applied, and continue to apply, to staff and customers while on the premises. While it was generally acknowledged that most pubs were compliant, it was also believed that a small minority were flouting the restrictions.

Enforcement of the restrictions was left primarily to the Garda. They, however, experienced considerable difficulty in checking compliance; especially in respect of the requirement that each customer should purchase, and be supplied with, a substantial meal. Anecdotally, stories abounded of publicans subverting the requirement by supplying non-dining customers with pizza boxes containing left over crusts of pizzas which would remain on the customers’ tables while they consumed beverages.

The new legislation was intended to tighten up enforcement, primarily by conferring each member of the Garda with draconian and unprecedented summary powers to deal with suspected breaches. It was also envisaged that the new Act would pave the way for the safe re-opening of pubs that did not serve food. Indeed, the prohibition on their opening was lifted only ten days after the legislation was enacted. The regulatory environment in which they re-opened, however, is very different to that which prevailed before they were first closed.

New Garda powers lie at the core of the new measures. They empower a member of the Garda to enter any licensed premises at any time to make such inspection, examination, observation and enquiry as he or she thinks proper. Such action can be taken for the purposes of: giving a direction compelling compliance with relevant COVID regulations; issuing an immediate closure order; or preventing or detecting offences under the Act or other COVID measures.

The power can also be used to assess compliance with: relevant COVID regulations, a direction issued by the member, a relevant compliance undertaking on the part of the publican, an immediate closure order, an emergency closure order, a compliance notice or a temporary closure order. It is an offence to prevent or obstruct a member exercising any of these powers.

Where a person refuses to comply with a direction from a member pursuant to these provisions, that member may request another member not below the rank of Superintendent to authorise him or her to issue an immediate closure order. The senior officer may issue an authorisation on being satisfied, on the basis of what he or she has been told, that there is non-compliance with a relevant regulatory requirement, the member’s direction is not being complied with and that the authorisation is appropriate. A closure order will have the effect of closing the premises immediately for the remainder of the day. Non-compliance with the order is a criminal offence.

There is further provision for a member of the Garda not below the rank of Superintendent to apply to the District Court for an emergency closure order lasting up to 72 hours. This can be done where there has been more than one failure to comply with a member’s direction pursuant to these provisions. Breach of such an order is a criminal offence.

A member of the Garda not below the rank of Superintendent can also issue a “compliance notice” where an immediate closure order has been issued or where a person is failing to comply with a direction from a member. The compliance order will require the person to comply with the direction. An application can be made to the District Court for a temporary closure order in respect of the premises concerned where a member not below the tank of Superintendent is of the opinion that there has been a failure to comply with a compliance notice and that the failure is likely to continue. The closure order can last for up to seven days, and up to 30 days in respect of repeat orders. Breach is a criminal offence.

On the face of it, these provisions are aimed at nothing more than ensuring swift and effective enforcement of the COVID restrictions on premises licensed to serve intoxicating liquor. It is reasonable to suppose that they will be interpreted and applied sensibly, and only as a last resort, by the Garda. Nevertheless, they contain elements that would be more at home in a police state, and there is always the risk that they will be used and abused beyond the purposes for which they were officially introduced.

The Garda powers are not only draconian in their extent, but they also take the Garda into coercive territory more usually reserved for the courts. These aspects are compounded by uncertainty surrounding their scope and the capacity of a government minister to extend their reach at any time.

A key element is the Garda power to issue a direction to a person whom he or she reasonably suspects is contravening a regulation issued by the Minister for Health pursuant to his or her extensive powers to issue COVID regulations. A direction can require the person to take such steps as the member considers necessary to comply with the regulation in question.

There are several objectionable features about this power. The first is that it clearly confers a member of the Garda with an extensive, summary, controlling power over the behaviour of the person. It is the individual member who determines what the person should or should not do to satisfy compliance with the regulation. More troubling is the indeterminate scope of the power. It waxes and wanes, not with the law as enacted by the legislature, but with the COVID regulations issued from time to time by the Minister for Health.

The Minister, of course, has already issued a very large number of COVID regulations imposing severe and unprecedented restrictions on core aspects of daily lives and freedoms. The Garda power to issue directions is linked to any of these that the Minister states to be penal regulations. In effect, the Minister has the power not just to create new regulatory criminal offences, but also to expand Garda powers to issue directions controlling the associated behaviour of individuals.

A further ominous twist to these powers arises from the manner in which the Minister has issued COVID regulations. Typically, the same body of regulations will combine a relatively small number of penal restrictions (eg. the restrictions on the opening of licensed premises) with a large number of non-penal restrictions (eg. controls on events in a private dwelling). The former are mandatory and attract the Garda power to issue directions, while the latter can best be described as persuasive or government guidance.

By mixing the binding and non-binding restrictions together in the same body of regulations, the government is obscuring the distinction between them and, therefore, making it difficult for persons affected to know where Garda powers begin and end in such matters. In that fog, gardaí will appear (and be believed) to have extensive and intrusive powers over huge swathes of private lives; much in the manner of a police state.

Another point worth noting in this context, is that the Garda power to issue directions may not actually be confined to COVID regulations that are stated to be penal provisions.  The legislation states that a member of the Garda may enter etc licensed premises for the purposes of giving a direction in relation to a penal provision “or otherwise”. It is not entirely clear what the addition of the words in parenthesis is meant to import. At the very least, they would appear to envisage enforcement powers stretching beyond the penal provisions. But how far and to what? Once again, there is a concern that the legislation is fuelling the perception of the Garda having open-ended power to compel obedience to Garda and government preferences; as in a police state.

Another striking feature of the Garda powers conferred by this legislation concerns the summary power to close a licensed business premises. Not only can a member enter the premises and issue binding directions to persons there with respect to their conduct, but he or she can summarily close the premises for the day when not satisfied with the response. This is virtually unprecedented as a Garda power. Enforced closure of a licensed business premises is traditionally a judicial matter. Extending it to the Garda is a significant enhancement of police powers and a signal change in the division between executive and judicial powers at the expense of the rights of the person.

Finally, it has to be acknowledged that the government presented the legislation as a necessary emergency response to the COVID crisis. It remains in force in the first instance only until the 9th November 2020. However, it can be continued beyond that date by a resolution passed by both Houses of the Oireachtas. In practice that tends to be a weak check on a government intent on holding on to such powers.

Another disturbing feature about this legislation, as with all the COVID measures, is the speed with which it was enacted. The Bill was first published on Friday 28th August. All stages were rushed through the Dail (Lower House) in a matter of hours on the following Wednesday and Thursday. Despite the fact that it was a significant and unusual criminal justice measure, it was not accompanied by an explanatory memorandum and the pre-legislative scrutiny stage was dispensed with. Very little scope was allowed to table amendments. All of the stages were rushed through the Seanad (Upper House) in a sterile debate on a single day. In effect the legislation was rubber-stamped in haste by a largely supine legislature. That is not appropriate for coercive criminal justice measures in a liberal democracy based on respect for the rule of law and fundamental rights.

The new Act is merely the latest chapter in an established and disturbing pattern which is not confined to COVID measures. Increasingly, extensive summary powers are being conferred on members of the Garda, often as a knee-jerk reaction to the latest social challenge. The legislature (with too few honourable exceptions among its members) rarely subjects these measures to rigorous scrutiny from perspectives of necessity or the rights and freedoms of the individual. Too often, they are waived through on the assumption that they will always be used fairly, and only as a last resort, by the Garda.

It may well be, of course, that the extensive and draconian powers conferred by the new Act will always be used sparingly and with commendable discretion by every member of the Garda. Experience shows that that is a naïve and even unreasonable expectation. Conferring broad and ill-defined summary powers on any police or executive body always risks abuse and unintended consequences. That is accentuated when those powers can be expanded further from time to time by an executive authority. It also helps to generate a sense that the police are the law, and the law is what a police officer directs. That is a dangerous development even in a democracy with a strong tradition of respect for fundamental rights and the rule of law.