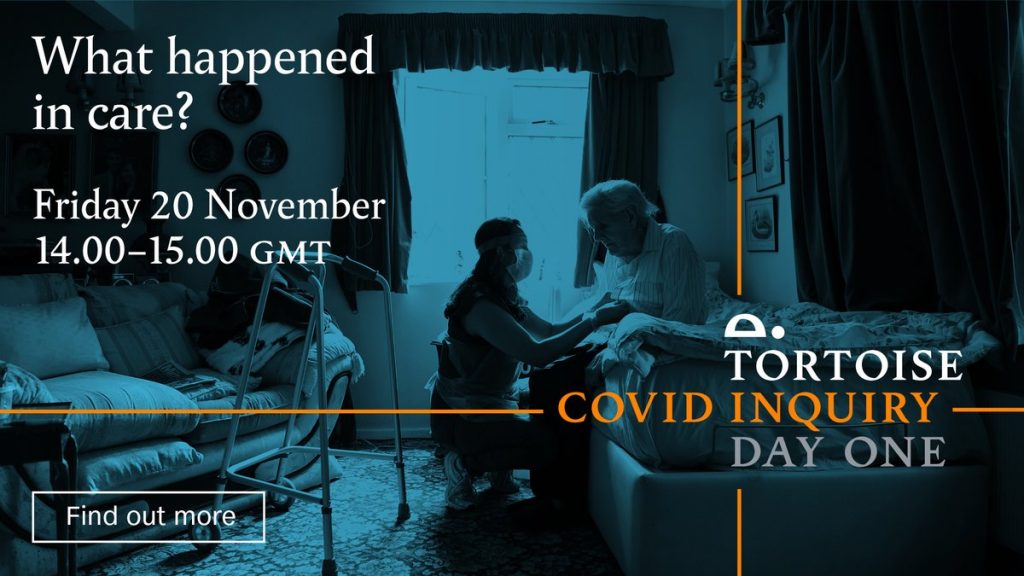 In times long before COVID, but not so long ago, a report was tabled at the United Nations Human Rights Council meeting of 2019. Written by Professor Philip Alston it summarised his findings from a formal visit to the UK to investigate the impact of Government policies on extreme poverty and their relationship with its human rights obligations. He found that ‘Social care services are at breaking point’. He said, ‘policies pursued since 2010 amount to retrogressive measures in clear violation of the country’s human rights obligations’.  This indicates the extent to which care provision is a political and a legal issue. Cuts in public spending in the name of austerity, that were targeted at local authorities since 2010, produced an £86 million reduction in the funding of adult social care according to Age UK, at the same time as demand was increasing rapidly.

Before the Coronavirus crisis, it was widely known for of years that care services were in crisis. That crisis had engulfed all aspects of this diverse sector, it is not all state funded, and the number of individual and families who pay privately has risen rapidly since 2010. At two-million strong, the size of the workforce is considerably larger than the NHS. When the pandemic hit the UK, there were 122,000 vacancies for hands-on care workers in England.

The sector had grown accustomed to its hand to mouth existence.

The legal framework that created rights and duties, and shaped service delivery had been regularly reviewed and subject to amendment as a consequence of public scandals, such as the unnecessary deaths of older patients at Mid Staffs NHS Hospital Trust (which had prompted the Francis Inquiry) and the Winterbourne View scandal in which people with intellectual disabilities were abused and neglected by those who were responsible for their care.

In England, an amendment to the regulatory framework in 2015 put reducing harm at the heart of social care regulation. The power vested in the Secretary of State, which gave him the power to impose regulatory requirements on providers of care, became a duty on the Secretary of State to impose requirements to secure care services that, ‘cause no avoidable harm to the persons for whom the services are provided’.

This raises important questions about what happened in care.  Were the deaths in care homes of thousands of people from COVID-19 a consequence of harm that was avoidable?

Was the risk of infection and transmission one that could not have been reasonably avoided?

Were care homes were overwhelmed by a force of nature or could more have been done to ensure obvious harms were avoided?

The regulations to which all registered care providers in England are subject, set out standards below which care must not fall.  These regulations demand that that care ‘must be provided in a safe way for service users’ and that registered provider must do, ‘all that is reasonably practicable to mitigate any risks to the health and safety of service users’. A breach of this aspect of the regulations is a criminal offence if it results in service users being exposed to avoidable harm or significant risk of harm.  We should ask:

Were the deaths in care homes the result of exposure to a significant risk of harm?

We should raise our awareness of the actors who might be held accountable for this exposure and of the decisions taken that exposed people to risk, rather than upheld their legal rights to safe care.

The organisation responsible for compliance and enforcement of regulations in England is the Care Quality Commission. In the early stages of the pandemic in March, the Care Quality Commission announced its suspension of its routine inspection of services.  The regulatory bodies in Wales and Scotland followed suit.  Each cited the prioritisation of safe care as the core reason for suspending inspections.  The argument was, that visitors would transmit virus and that the goal of safe care required care providers to focus on the needs of their service users and residents rather than to worry unduly about demonstrating compliance.

However, at a time when lockdown rules prevented friends and family from visiting care homes, it is reasonable to question whether an absence of oversight by care standards inspectors contributed to the deprioritisation of adhereance to legal rules that were designed to ensure safe care?

It is certainly the case that we know less than we would otherwise know about what happened in care homes during the crucial period of late February through to June.

For the time when COVID-19 began to ravage through care homes, society’s key eye-witnesses are care workers and care home residents.  However, both are groups that are social marginalised; they are rarely (if ever) included in policy development discussions; they find it hard to be listened to at the best of times; they face multiple disadvantages  – and they are still collectively processing the traumas that the pandemic inflicted on them. It is essential that inquiries into what happened seek to fill this considerable knowledge gap, by listening to care workers and the users of services.

According to the ONS, over 19,000 care home residents died from COVID-19 in England between 2nd March and 12th June 2020.  Over 38,000 excess deaths occurred in the same period. The deaths of Black and Asian care home residents was disproportionately high.

The discharge of people from hospitals to care homes without testing has been identified as a key problem in transmission.

My research team at Kent Law School found that an overwhelming majority of care workers reported the absence of occupational sick pay as a key reason why they were unable to self-isolate.

Department of Health guidance on the use of Personal Protective Equipment by care workers was inadequate to protect residents and workers during February, March and April.

The unavailability of PPE was also a chronic problem across the sector.

We knew there was a crisis in care that pre-existed and preceded the pandemic.  To what extent might that have provided the conditions for a perfect storm in which an unimaginable tragedy took hold?

Watch Professor Hayes’ presentation again (below). For more information about Day One of the Tortoise COVID Inquiry, visit TortoiseMedia.com

Professor Lydia Hayes is Principal Investigator for the Wellcome Trust funded research project on Social Care Regulation at Work. Her research focuses on the socio-legal impact of minimum labour standards and basic employment rights. It blends detailed doctrinal analysis with qualitative social science methods. Recent books include One Hundred Years of Equal Pay Law (Hart, 2020) and Stories of Care: A Labour of Law (2017).