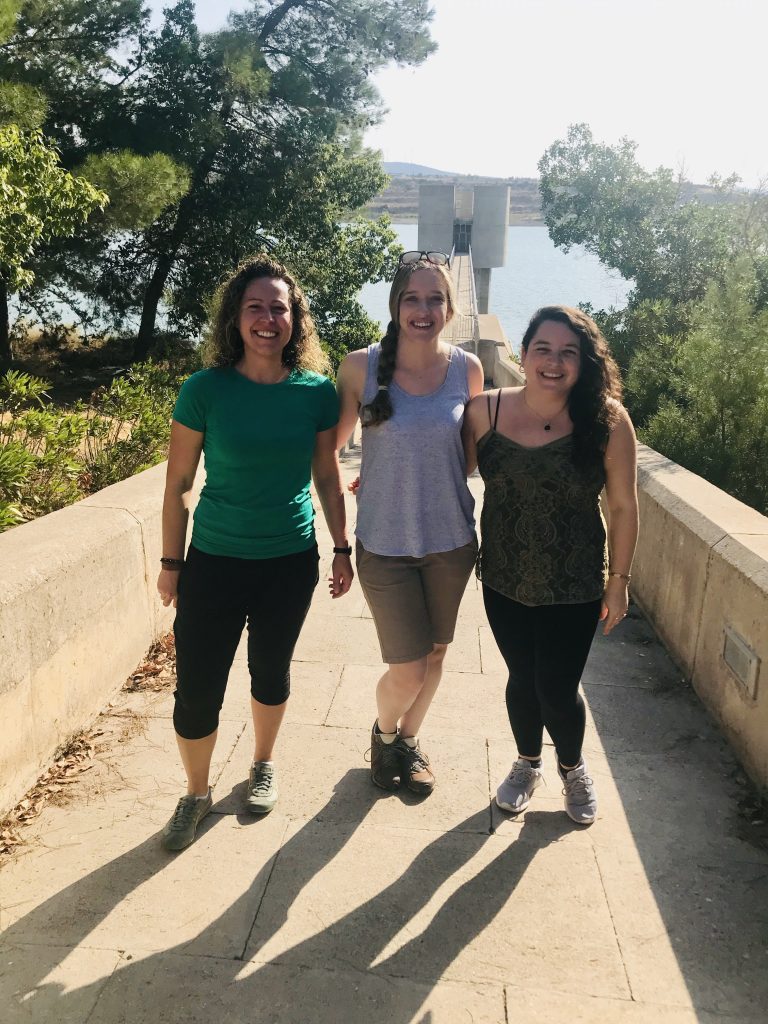 Mia joined a three-day study tour to Cyprus with the UK Irrigation Association (UKIA) after being awarded a Jack Wright Memorial Trust Scholarship. Her thesis explores how what she calls the “commodification” of water impacts disputes over access to water resources, in particular as a form of pacification. During her visit to Cyprus, she was able to see first-hand the approach to water management taken by the people managing farms, dams, reservoirs, irrigation systems, and wastewater treatment plants across the country.

Although Mia’s thesis focuses predominantly on water conflict and pacification in Palestine and Israel, she found that Cyprus presented clear similarities: ‘It is in the same agro-climatic region; it includes dependence on both surface and groundwater (which are significant in the Palestinian case); it’s an area where irrigation is important in a context of overall water scarcity; and it’s an area where water is “conflicted” from a transboundary water-sharing perspective.’

Mia has ambitions to pursue a career in irrigation research and policy, working within international and non-governmental organisations. To this end, she said her study visit enhanced her perspectives: ‘Since my background is from the academic social sciences, I lack formal training in agriculture, engineering or hydrology. The tour programme offered engagement with these topics in an interesting new environment and, furthermore, allowed me to spend time with farmers whose experience with water and water scarcity expanded my understanding of how agricultural water users view water scarcity.’

The overall learning experience of the trip proved enriching for Mia: ‘It was a unique platform for engaging with others and an effective networking opportunity. Having an array of irrigation experts coming together around one table (or rather, one water filter!) created a situation in which the set of our collective knowledge was complementary and far-reaching. This enabled us to have extensive discussions and learn a great deal.

‘Furthermore, the “field” aspect of the tour was extremely important for my research. For example, during our visit to a citrus factory, which included a visit to its orchards, I was able to see for the first time the entire production process and at every stage. Until now, I have spoken to very few farmers. The visit was a fantastic opportunity to engage with their ways of thinking and to learn about their priorities and needs. The encounter with farmers was facilitated both through the group members as well as the local farmers we met. Cypriot farmers were able to shed important light on their experience of irrigating within the context of overall water scarcity and a less developed sector, hence, more like the Palestinian and Israeli ones.

‘This reality means that water users have to be creative in capitalising on the terrain– a concept I borrow from the Geographer Stuart Elden in my analysis of water commodification for efficient water accumulation. For instance, the Cypriot Southern Conveyor works on gravity. Similarly, the treatment plant’s key advantage, as the director of the site explained, is that it uses the slope of the mountain on top of which it is located such that the natural flow between each stage of treatment reduces the production costs. My emphasis is that these simple structures achieved what they were meant to do by capitalising on the topography, and by using very limited resources.’

In the wake of the study tour, Mia was asked by UKIA to consider what lessons about water management practices could be learned by the UK. Mia produced a short report making some basic recommendations: ‘A big lesson from Cyprus was the overall awareness people have about the value of water. As our guide proudly explained to us, Cypriot kids are taught in schools the importance of smart water use and the need for water savings. In light of a reality in which the “West” often takes water for granted, I believe that this point is a crucial one. Furthermore, I would suggest that public awareness combined with strong data collection (another key lesson from Cyprus), may enable policy-makers to implement changes in water allocations in a less contested way.’

Mia is supervised at Kent Law School by Reader in Law Dr Luis Eslava and Reader in Legal History and Theory Dr Thanos Zartaloudis. Dr Eslava said: ‘Mia’s field study visit is a really good example of our students doing critical and exciting academic work which is relevant to key industries in our times of climate change and environmental crises.’

Mia is now writing up her fieldwork chapter for her thesis. Up next is the final chapter on pacification: ‘This chapter will consist of a mini case-study of the Jordan-Valley where I will “zoom-in” further, building on my elaboration in the two previous chapters on water commodification, and finally “zoom-out” again to bring the analysis back together towards the thesis I am putting forward on pacification.’

Title: Transboundary water conflict and pacification in Palestine /Israel: the two stages of water commodification and their manifestations through land and agricultural production

Abstract: My research engages critically with alarmist scholarship that argues that water conflicts pose threats to international security. In contrast to current theories of “water peace” and “water war”, and also in conversation with Virtual Water scholarship that argues that what we are witnessing is best understood via trade relations, I suggest that the ways in which water scholars and practitioners conceptualise water itself – often, as a commodity – necessarily have effects on how water is being managed and shared. Accordingly, I analyse the process of water commodification and how this process attends to the particularities of water. I draw on political ecology theories regarding the material-discursive and socio-economic dimensions of commodification, whilst deploying socio-legal research methods using the Palestine/Israel case study to consider water use within the agricultural sector in particular. Analysing what I call the “two stages” of the process of water commodification, that is, water commodified as a ‘product’ in itself, and water commodified as a factor of production within the production processes of other goods (here, of foodstuff), I aim to highlight the embeddedness of water within its ecological and social context. These stages of commodification correspond to two manifestations I identify emerging from my fieldwork within the specific landscape of Palestine/Israel, namely, the dispossession of land and of people’s livelihoods. Ultimately I argue that, since the control over water management can decisively influence the livelihoods of a people with/in their land, water commodification acts as a form of pacification of (direct) violence.