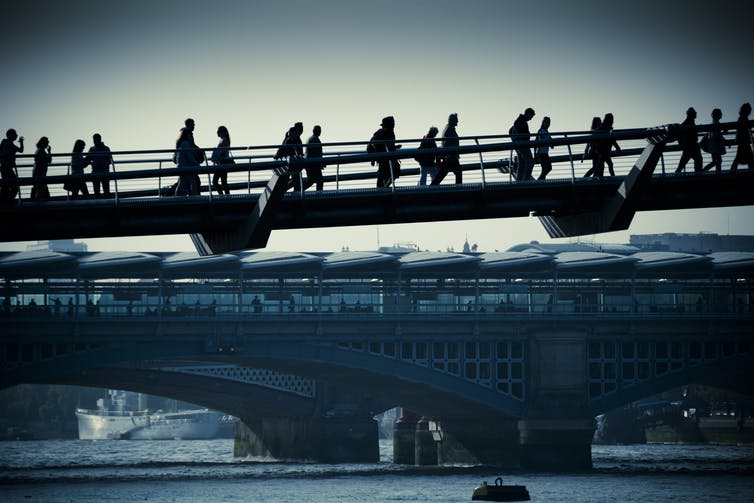 There is a widespread perception that mental ill health is on the rise in the West, in tandem with a prolonged decline in collective well-being. The idea that there are social and economic causes behind this perceived decline is increasingly convincing, amid what has been termed the zombie economics and grinding austerity, which have followed the global financial crash.

In particular, there is growing concern that the conditions and effects of neoliberalism – the enervating whirl of relentless privatisation, spiralling inequality, withdrawal of basic state support and benefits, ever-increasing and pointless work demands, fake news, unemployment and precarious work – is partly to blame. Perhaps most wearying are the invasive yet distant commands from media, state institutions, advertisements, friends or employers to self-maximise, persevere, grab your slice of the diminishing pie, “because you are worth it” – although you must constantly prove it, every day.

In our work and leisure we are urged to feign permanent enthusiasm amid radically lowered expectations. Neoliberal newspeak hollows out the terminology of achievement, mandating boasts about personal “excellence” and “dedication” as actual possibilities for achievement diminish and work becomes stripped of meaning. At my institution, the cleaners’ uniforms are emblazoned with inscriptions announcing that they deliver their work with “passion, professionalism and pride” – as if it were reasonable to demand “passion” from a cleaner on minimum wage whose workload has doubled since 2012.

A colleague recently informed me that young children in Bermuda make amends for misbehaviour by intoning, “I want to make good choices”. As criminologists Steve Hall, Simon Winlow and Craig Ancrum have explored, “choices” become life-or-death when a bad choice or two can turn you into an irremediable “loser”. We are told that structural barriers to aspiration, achievement and contentment will melt away in our fantasy “choice” economy.

But this falsehood of “free choice” demotivates and depoliticises. In such a world, depression, anxiety, narcissism (the primitive defence of the infantile self against overwhelming attack) are entirely logical responses. It has been confirmed that neoliberal societies make their citizens physically as well as mentally sick; the effect is magnified the more unequal the society and the more unprotected its citizens from free-market “competitiveness”.

Depression in this context may appear almost self-protective: an opt-out from an unwinnable set of continual competitions. The recent rise in diagnoses of mental illnesses and “developmental disorders” involving states of agitation and hyperstimulation is similarly interesting. In the case of ADHD, for example, a person’s hyperactivity and distractibility render them officially “disordered” or even disabled, to the extent that they are supposedly unable to cope with a hyperstimulating, late-capitalist environment. Yet they are, in another sense, entirely in tune with an economy of non-stop distraction, in which attention is repeatedly grabbed at and financially exploited.

Neoliberalised healthcare requires every patient (or rather, “client” of healthcare “services”) to take responsibility for her own state or behaviour. Mental healthcare is therefore being reframed as a series of “outcomes” geared at measurable improvement which the “service user” must manage by themselves as far as possible. Access to psychiatric diagnosis and support from public health services (and also within private or employer-run occupational healthcare schemes) sometimes depends on completion of a mood or symptom diary using smartphone or Fitbit self-tracking techniques. And there may well be more punitive future consequences for failure to self-track, as employers and perhaps benefit agencies gain more power to command this sort of performance from workers.

This “mHealth” app “revolution” also shows us how mental illness and anxiety about mental health itself may be deftly commodified and financialised. Measurement apps like MoodGym are purchased by the UK’s National Health Service for use with patients. As the patient self-monitors, she is persistently encouraged to demonstrate “recovery”, regardless of long-term impairment. It is telling, too, that recovery is based on “fitness for work” since the worthwhile adult is engaged in work activity at all times.

This focus on work-readiness partially explains the relative paucity of children’s mental health services in the UK, which are catastrophically low in beds and were among the first to be privatised.

Neoliberal states divest themselves of the costs of care by individualising and privatising care duties. People displaying troubling symptoms are divided into the “dangerous”, against whom punitive or authoritarian containment methods may be used, and those left to cope with what resources they or their families have left.

The 1970s-80s saw the closure of the last asylums in the UK and the welcome end of long-term institutionalisation for thousands written off as “mad” and without rights to liberty. As the state also made significant savings through the transfer of patients back into “the community”, the situation appeared win-win. But half a century after “care in the community” became the norm for most chronically ill patients, effective community treatment is stymied by slashed budgets, low staffing levels and morale. Systematically defunded NHS psychiatric services struggle to fulfil the legal burdens placed on them to provide basic care.

Increasingly, it is the police who handle “front-line” mental health crises in the UK. Prisons “warehouse” the mentally distressed. Meanwhile in US prisons “mental health” wards house suicidal or otherwise mentally or emotionally unstable prisoners, who are placed in special “suicide-proof” garments and cells, sometimes in prolonged isolation. Any pretence of care will ultimately recede in favour of protection against litigation in the prison context. “Suicide smocks” are now placed on patients who appear suicidal or psychotic on admission or during incarceration in many US states, and are worn even in court.

What ways, then, are there to resist these worrying trends? Black humour is one way to deal with systems which command “positivity” while simultaneously informing you at every stage that you are already a “loser”. But collectivity of various kinds will be our best protector. As psychologist Paul Verhaeghe predicts, the age of the “utterly unrelieved individual” has (probably) reached its limit. What lies beyond the limit, particularly for those already broken or caught in the punitive grip of incarcerative “care”, is less clear.