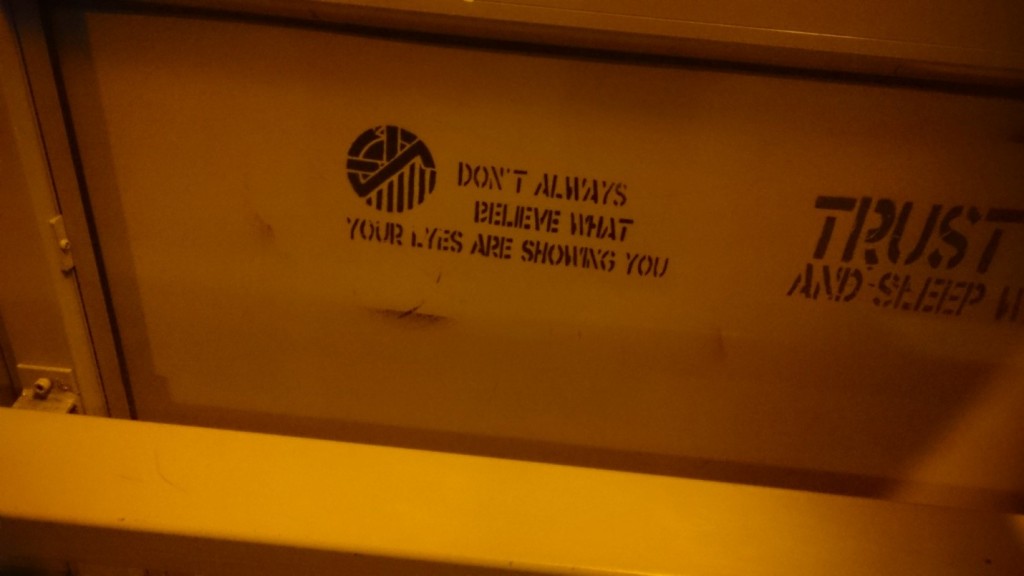 On a bench at a stop by the road in a little town in South East England a message reads: ‘Do not always believe what your eyes are showing you.’

Standing by waiting for a bus, this ominous message started a train of thought that took me to ideas of understanding the world around us from the mundane to the controversial. What does this message mean? Who is it really for? And why a bus stop of all places? But in this case of deciphering the message, it is important to recognize the actors of this encounter; the reader, the writer and the place of the message/the bus stop.

The message, the bus stop, the reader have all something in common. They all interact with and give meaning to the ‘space’ in which they encounter each other in their own relative way. They are all situated within one space but in themselves a relative to ‘something’. To the writer of the message it is his relation to the meaning, purpose and place of the message. The place of the message, the bus stop, has it’s own meaning and purpose as a public place that is a link for the commuter to travel around the space of the area in which he resides. The reader, may be a commuter/or passerby who stands there and reads the message wonders what the message means to them and what to make of it for themselves. All meeting within this one place and each understanding the space relative to ‘themselves’ and interacting with each others space in their own way.

So what is this ‘space’ I keep referring to?

The word ‘space’ brings up the picture of the solar system and the black canvas filled with stars, moons and planets at the first instance. This ‘outer space’, where the blank canvass or the ‘nothingness’ in between those stars and planets and the nothingness that things occupy, is usually the first image that one thinks of when the word ‘space’ comes up. The Oxford English Dictionary describes space as ‘A continuous area or expanse which is free, available, or unoccupied’. Other everyday uses of space can be heard of when we talk about public spaces, private spaces, the virtual space, all alluding to the idea that space is something that is just ‘out there’. Space becomes this, a way of association, hence public, private, virtual, are deemed as kinds of spaces. But this way of thinking looks at space as something without a life, character and concept of its own.

But why does the word ‘space’ need to have a character of its own? Are associating adjectives like public, private, virtual not enough to describe a kind of space? Is space just an empty vastness, the tabula rasa, the container waiting to be occupied and filled? Or is it part of social life, of the way we perceive, think about and interact with in our everyday life.

If ideas themselves are part of our inherent subjectivity, that why should not the idea of space be spared of such scrutiny? Is there something ‘natural’ about space, can it merely just ‘be’ or is it something that differs based on how space is perceived and thought about in everyday life?

A case for spatial detectives

These are all questions that the ‘spatial detectives’ wrestle with. The metaphor ‘spatial detectives’ coined by Bennet and Layard in their article “Legal Geography: Becoming Spatial Detectives” is a term used for researchers that search ‘spatialities in legal practice’ and enquire into law’s effects and traces embedded within ‘places’. A spatial detective, in other words, is a critical researcher. One who sees the physical, social and abstract dimensions around which life happens as an important piece of the puzzle and asks how law as an abstract way of organizing our external world creates, defines and imposes spaces, both physical and symbolic, in everyday life.

Then ‘space’ here becomes part of a different enquiry, one that questions the commonly understood perception of ‘space’ as an area or expanse which is free, available or unoccupied. If from the perspective of social life, it should be subject to differing perceptions, ideas and interactions, then ‘space’ is not simply out there. Space is socially constructed through the eyes of different social actors and interacted with through those that encounter it in their everyday social life. It is dynamic and relational to those that behold it with their perspectives and ideas of how the world should be. For our writer of the message on the bus stop, it is a space for effective communication, for the reader, it might mean something insignificant depending on what it means to them. And even the Bus stop itself, has it’s own purpose within it’s space that is different to that of both the reader and the writer.

A spatial detective thus must question every spatial assumption within a social context, since space, like social life, could also be constructed. But constructed to what end? Is it relative to someone? Or some ideology? Some perception of life and reality?

The case of the history of international law

The orthodox history of international law, in many ways,is  built upon how the world was perceived by a select few, who defined, marked, and appropriated spaces around them. Territories, as physically bounded jurisdictional boundaries, were ‘made/produced’, defined in a way assumed as natural to all. And those that lived in those places had no say on how they related themselves and organized themselves with those physical surroundings. That there were other ways to relate to those lands than a specific definition derived from the natural law that Fransisco de Vitoria presented as an argument to legitimize ‘humane’ colonization.

Hence, in order to understand the world as seen by the presumptions of international law, we must de-construct our understanding of the presumptions of the international law. That there is only one way to see the world, as a system of nation states bounded within their physical boundaries. But that perhaps the very idea that there is only one way to view the world itself ignores other voices and perceptions of how to view the world. And that behind such a claim, is a far more complex way in which those that impose their own reality operate to exercise control over the spaces of others. Ways of social organization such as networks and making ‘places’ that are also central to the way in which other manners of social organization, such as territories, are produced and reproduced relative to the source of the production; the empire. And these different ways of social organization correlate and interact with each other in producing, affirming and appropriating spaces of others through violence.

The case of the history of international law is perhaps one of the most interesting cases for a spatial detective. Because behind the presumed reality of international law’s territorially bounded nation states, is a far more complex way in which the world was and is still being made. And the message at the bus stop corner of Westgate Avenue Road, ‘Do not believe what your eyes are showing you’, should be taken to heart when looking at the making and operation of international law in everyday life.