The Centre is pleased to announce that one of the first students on the MA in Imperial History has been awarded a prestigious CHASE studentship. Tarryn Gourley will use this fully-funded PhD scholarship to pursue a project on youth and political violence in post-colonial Zambia. Congratulations Tarryn! Christine Whyte was invited to be part of a panel organised by the Women in International Law Interest Group (WILIG), which is part of the  American Society of International Law, in Washington DC. The panel discussed the potential for taking a gendered approach to shaping American foreign policy and humanitarianism in the new administration. Staff and students from the University of Kent were joined by colleagues from as far afield as South Africa at the launch of Giacomo Macola’s new monograph The Gun in Central Africa. Why did some central African peoples embrace gun technology in the nineteenth century, and others turn their backs on it? In answering this question, The Gun in Central Africa offers a thorough reassessment of the history of firearms in central Africa. Marrying the insights of Africanist historiography with those of consumption and science and technology studies, Giacomo Macola approaches the subject from a culturally sensitive perspective that encompasses both the practical and the symbolic attributes of firearms.

Informed by the view that the power of objects extends beyond their immediate service functions, The Gun in Central Africa presents Africans as agents of technological re-innovation who understood guns in terms of their changing social structures and political interests. By placing firearms at the heart of the analysis, this volume casts new light on processes of state formation and military revolution in the era of the long-distance trade, the workings of central African gender identities and honor cultures, and the politics of the colonial encounter.

Christine Whyte  and Andrew Cohen from the Centre for the History of Colonialisms provided commentary and fielded questions in the lively discussion following Dr Macola’s presentation of the book.

Studying the empire: can history students avoid pitfalls of the past?

This Guardian blogpost by an MA student explains why studying imperial history is complex, fascinating and important!

As the refugees sheltering in the ‘Jungle’ camp in Calais await its demolition, the British government finally announced its intention to permit migrant children with family in the UK to enter the country.

Listen to the BBC Radio 4 segment about the announcements made in Calais, here. 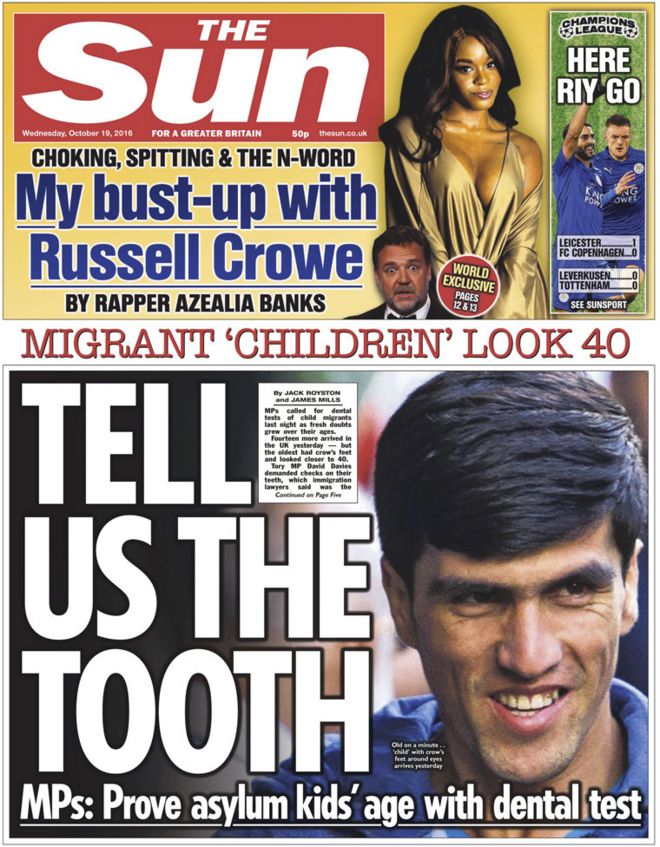 The Sun newspaper echoes Conservative calls for ‘dental tests’ to prove the age of the migrants.

However, the move is being challenged by Conservative MPs and media. For example, David Davies MP tweeted;

“These don’t look like “children” to me. I hope British hospitality is not being abused.”

This challenge rests on the notion that only children (defined by being under 18 years of age) have the right to resettle in the UK. Biological age becomes the determining factor in assessing the right to humanitarian aid.And how is it possible to verify the status of being a ‘child’?

Opponents to the migrant resettlement have called for dental testing to ‘prove’ ages. However, these tests are often inaccurate (Listen here from 51:00 for an interview on the reliability of the practice) and the British Dental Association has firmly voiced their opposition.

Anthropologist Susan J Terrio investigated a similar policy approach in France, where officials use a controversial bone development assessment to determine the ages of undocumented minors. The consequences of ‘failing’ such biological tests are catastrophic, as she illustrates with the example of a homeless Gabonese minor, who was identified as a legal adult as a result of the skeletal development and served a year in an adult prison at the age of sixteen. (1)

This is not the first time the British government has resorted to inaccurate biological signifiers of ‘childhood’ in order to apply a humanitarian policy. The British slave trade abolitionist movement was animated by concerns over the impact of the slave trade on children. (2) One of the earliest pieces of legislation aimed at ameliorating the the conditions for enslaved people was Dolben’s Act (1788). This act limited the number of people that could be transported aboard British Slave Ships. It defined a ‘child’ slave as  those “who shall not exceed four Feet four Inches in Height”. Because the act was primarily concerned with the issue of space; it decreed that “If more than 2-5ths of the Slaves be Children, 5 of the Surplus to be deemed equal to 4 Slaves.” That meant that slave traders could take more enslaved people aboard, provided they were under 4’4″ and presumed to be children. Colleen Vasconcellos argues that this was responsible for an increased proportion of children being take up into the trade.

This marker of 4’4″ was taken up in subsequent legislation relating to enslaved children. It defined children on slave plantations in the Caribbean and missionary schools in early colonial Sierra Leone. Despite the obvious problems with it as a universal tool, because height varies greatly not only with age but also with health, particularly the effects of malnutrition, ethnicity and gender.

Other means were also used, in the Indian Ocean slave trade for example, an ‘estimate of maturity’ was used alongside the individual’s own perceived age. (3) This kind of reckoning left considerable scope on both sides for fudging the dividing line.

Being defined as a child didn’t always offer extra protection from exploitation or harm in the British Empire. Sometimes, children were targeted as a cheap and easily controlled labor source. For example, ‘destitute children’ were forced to serve as indentured servants by the government of the Cape Colony in the latter half of the 19th century. (4)

The question of defining childhood is a complicated one — and an extensive historical literature has emerged which tackles not only the question of the shifting and contingent meanings of childhood, but also attempts to address how notions of childhood, youth and adulthood are shaped by cultural and social contexts.

The debate over ‘Who is a child?’ and how are childhood is defined  had and  continues to have lasting and significant consequences in the lives of vulnerable and exploited people, subject to the scrutiny or intervention of government agencies.