Through her work, Dr Rebecca O’Connor, a member of the Centre for Interdisciplinary Studies of Reproduction (CISoR) from the School of Biosciences, found previously undiscovered, fundamental flaws in the pig genome, the results of which have contributed to improved mapping of the pig genome.

In pigs – which provide 43% of the meat consumed worldwide – a chromosome defect can affect fertility.

With each pig producing as many as 14 piglets per litter, a faulty chromosome can reduce this by as much as half, with massive economic costs to the producer.

Now with 13 clients in eight different countries, the team are screening hundreds of samples a year, as well as adapting the method to screen for chromosome abnormalities in other species.

The research findings were presented to agricultural industry leaders at the Pig Breeders Round Table Conference, one of the foremost international conferences on livestock genetics, held at the University of Kent in May 2017. 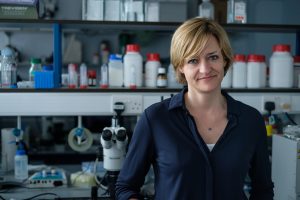 Dr O’Connor, research associate in the School of Biosciences, won the 2017 University Prize for Postgraduate Research in recognition of her ‘exceptional publication record, and achievements far beyond those normally expected of a doctoral student’.