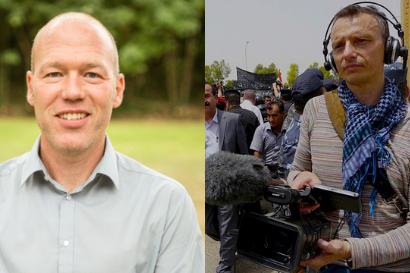 Before joining Kent, what were you doing?
Ben: I worked for 10 years as a Principal Lecturer at the University of Roehampton, leading their Journalism programme for two years and their Media & Culture programme for two years.
Richard: I was a freelance director-producer-reporter, doing news and documentary films for terrestrial TV.

What are your hobbies or interests?
Ben: Mountain biking, motorcycling, walking, swimming, kayaking
Richard: I do Yoga every morning and sing the classical repertoire in the Barts choir in central London.

What kind of books do you like?
Ben: I love travel writing. I love reading about different journeys and the history and culture of places. I’m currently reading Tim Moore’s ‘The cyclist who went out in the cold’ which is based on a journey he made across Russia and former soviet states on an old East German shopping bike. It’s very funny but also contains a lot of details on the history and politics of this region – interesting and poignant to read in the context of the war in Ukraine.
Richard: I only read non-fiction books.

What would you say are some fun things to do in Kent?
Ben: Kent has a huge amount going for it as a county and yet is sometimes overlooked or underestimated. There is a lot going on culturally in East Kent with lots of festivals on throughout the year. It’s got a good mix of vibrant towns, lovely countryside and coastline. I like its connectedness to both London and Europe – travelling from Kent you can be in Paris more quickly than you can Manchester!
Richard: My recommendation is walking in the amazing countryside.