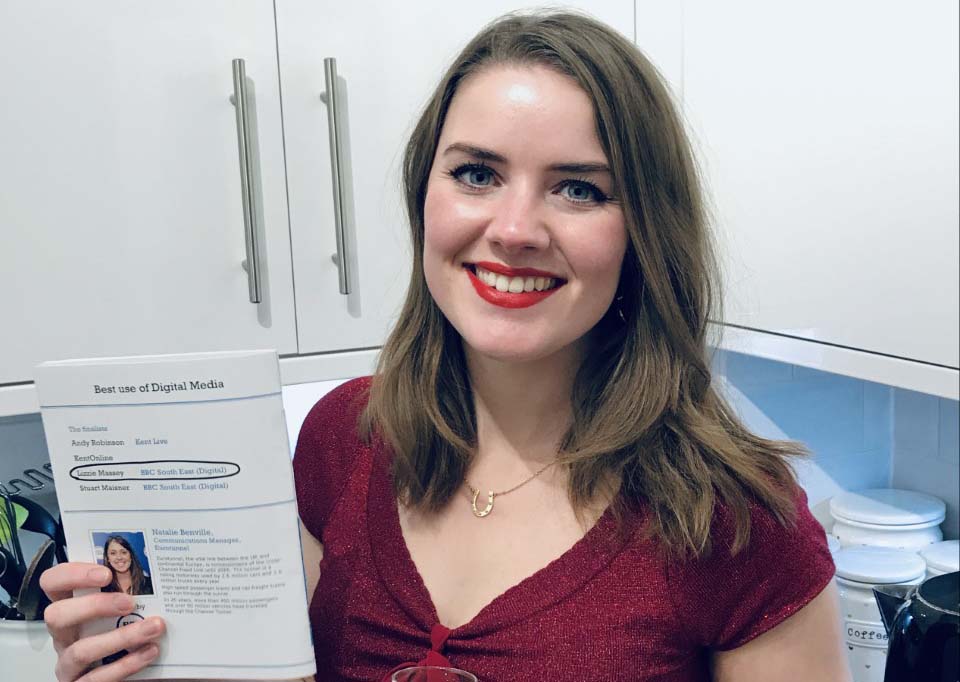 Lizzie works in broadcast journalism at BBC South East. She’s part of a digital team creating videos and stories for the main England BBC News page. She also looks after BBC Southeast’s social media channels. The judges said of her work: ‘”Lizzie is fresh, engaging and knowledgeable, she matches the content for the appropriate channel.”

Lizzie said: ‘This award was specifically about digital media so it focused primarily on my work creating videos including: explainers with graphics on the election, human interest pieces about individuals and their struggles, and fun fluff pieces. It also recognised the impact I’ve had on our social media channels, including doubling our Instagram following.’

Lizzie graduated from Kent with an MA in Multimedia Journalism in 2012. She said: ‘CFJ gave me a lot of basic skills including news writing and having a good nose for a story. That is vital in whatever media industry you go into. It helped me get my first job with the KM Media Group, which led onto my role in the BBC. The skills I obtained at CfJ helped me further at the BBC as the scope of my work widened, including having FCP (Final Cut Pro) training and experience both in front of and behind the camera.

‘The teaching staff at CFJ are brilliant and if you have an interest in something they’re always there to help and further your passions. If you’re not sure exactly what you want yet they’re there to give you a basic knowledge across all platforms.’

A highlight for Lizzie during her studies at CfJ was creating a website and interviewing Falkland Veterans for a 30th anniversary piece. She was less keen on ‘newsdays’: ‘I used to absolutely hate newsdays. In fact, we all used to dread them! I’m pretty sure at one point we all said that we no longer wanted to work in news at all after a particularly awful newsday. But I’d just say the point of them is really to get you to think quickly, be flexible, have courage in your convictions, and find ways to work and cope under pressure. I’ve never had a day as horrible at work as the news days at uni!!’