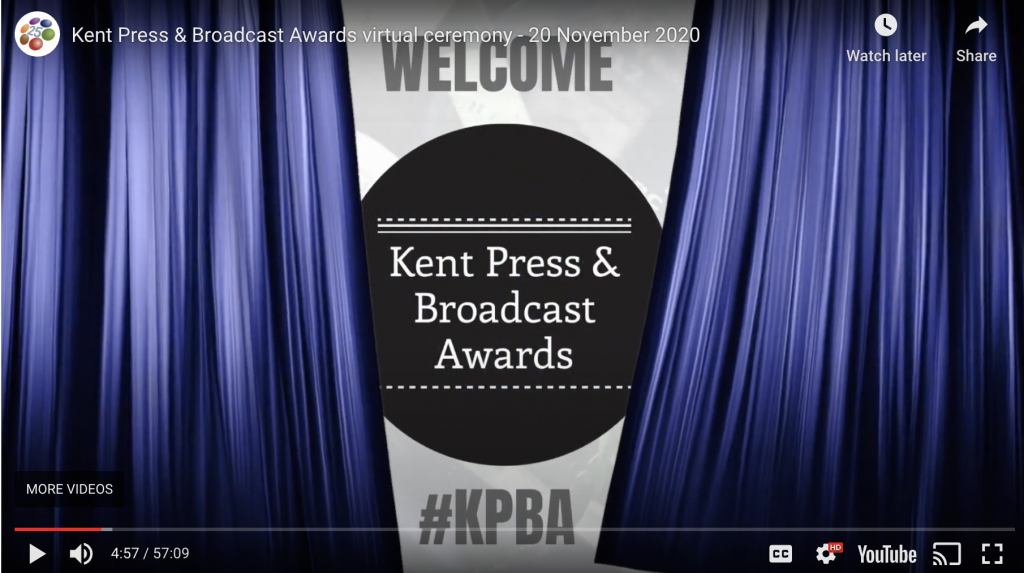 It was a big night of success for Kent’s Centre for Journalism (CfJ) graduates at the annual Kent Press & Broadcast Awards (KBPA) with two wins and a strong showing across all categories.

Multimedia Journalism MA graduates Lizzie Massey and Brad Harper were each announced winners during a virtual awards ceremony for the county’s media, streamed on Friday via Facebook and YouTube.

Lizzie won the award for ‘Best Use of Digital Media’ and Brad was named ‘Kent New Journalist of the Year.’

Lizzie graduated from Kent in 2012 and is now a broadcast journalist for BBC South East. The judges said of her work: ‘”Lizzie is fresh, engaging and knowledgeable, she matches the content for the appropriate channel.”

Brad graduated from CfJ last year and currently works as a reporter for The Kentish Gazette and Kent Online. The judges said: “Brad was a stand-out winner, he covers a great breadth of stories, sensitively written, as well as creating newsy, undercover stuff we really wanted to read.”

It was also a great night for CfJ alumnus Joe Coshan who was Highly Commended in two categories: ‘Kent Sports Journalist of the Year’; and ‘Kent Feature Journalist of the Year (Broadcast)’. Joe graduated from CfJ with a Journalism BA in 2018 and is now Assistant Editor for KMTV (Kent’s local TV station). The judges praised “his energy and excitement” and said he was “good at getting something out of nothing. His work is clever, thoughtful and creative.”

Staff from KMTV (based on Kent’s Medway campus) also scooped a number of awards: Mark Simmonite won Kent Media Innovation of the Year (for keeping the show on the road during lockdown whilst getting viewing figures up); and Katya Fowler was shortlisted in the ‘Kent New Journalist of Year’ category. Former KMTV journalist Josie Fowler won ‘Broadcast Journalist of the Year’

CfJ was also delighted to see a win for KentOnline as ‘Kent News Website of the Year’ where Journalism BA graduate (2015) Amy Nickalls is Senior News Editor.