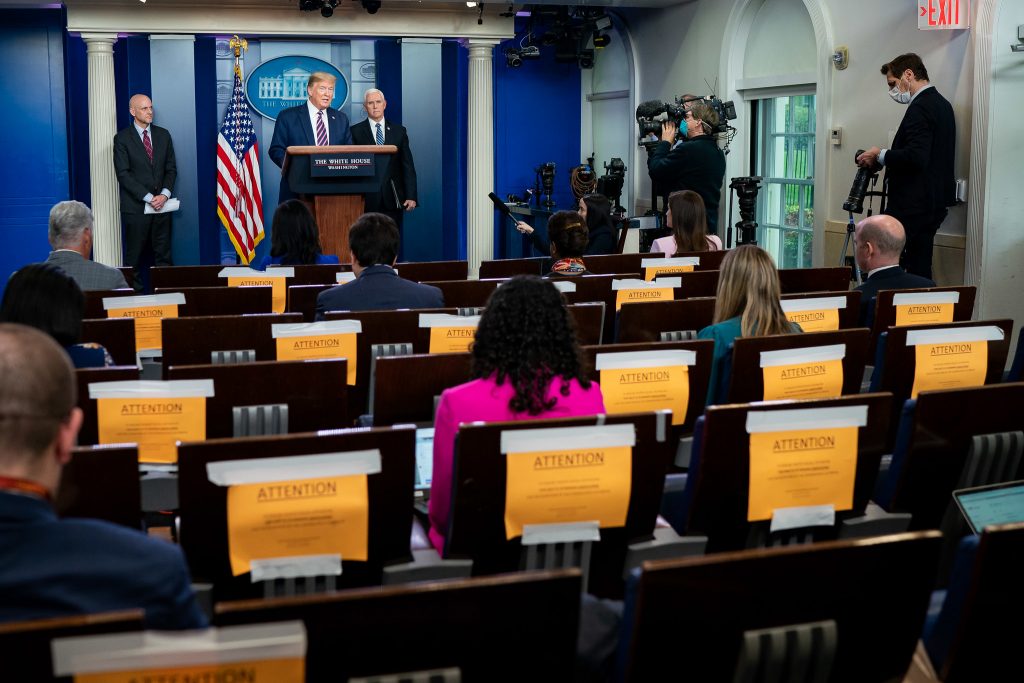 We are all in the middle of a huge unfolding story. Journalists can help make sense of what’s happening and how to deal with the impact the virus has on all our lives. Audiences for all the serious news organisations and the big TV news bulletins are massively up.

As you know, the CfJ will train you to be a reporter. That means we help nosey, clever people such as yourselves find things out that we all want to know but don’t. You then check it’s true. The final step is that you publish your news to as wide an audience as possible.

The COVID-19 emergency is often likened to being at war. Care home and NHS workers, refuse workers and supermarket workers, are now routinely referred to as ‘frontline’ staff.

Conflict reporters normally work abroad. I’ve worked in Chechnya and Iraq and knew that if things got too difficult, there was always the opportunity to get on a plane and fly home to ‘normality’. For British journalists reporting on the virus, suddenly the emotional distance between reporter and the people they’re reporting on has greatly shrunk. The BBC medical correspondent Fergus Walsh has found himself producing dramatic ‘frontline’ reports from COVID-19 wards in central London hospitals. Just like war reporters, Fergus has found that doing his job also has an emotional impact. Unlike conventional reportage in a distant conflict, the victims of the virus are his fellow Londoners.

At the CfJ, we help you find your own way of ‘doing journalism’ that is right for you. There are many valid approaches. War reporters also come in different varieties. Chris Ayres of The Times called his approach war reporting for cowards, and wrote a book about it. One friend, who has done many assignments in Afghanistan, talked at the start of the crisis of his ‘waves of anxiety’ when thinking about how to shop safely at his local Sainsburys.

For journalists, Coronavirus is an interesting thing to get their heads around and report on, but also terrible. News organisations are laying off staff, largely because advertising revenue has dried up. Hardly anyone is buying a daily newspaper at the shop anymore. It’s hard for reporters to go out and gather news. Social distancing rules make it hard to work but ‘boom poles’, those things with a big fluffy sock on the end that you see television reporters using to interview people, are a big help. The technology helps. It’s amazing what you can do with your presenters at home. It’s no longer a shock to see Channel 4 News presenters, including Jon Snow, working from their home office. You easily forget that radio presenters have also been presenting news programmes from home until the connection fails and they switch back to the news reader in the office until it gets working again. Kids also intrude unexpectedly into live interviews with politicians.

We’ve got our own ‘distributed studio’ too. Upstairs from the CfJ newsrooms, you’ll find our very own public service broadcaster, KMTV. This is the university’s Ofcom-regulated television station. The staff, many of them former graduates, have done a heroic job keeping the channel on air. Kent people appreciate this, and the audiences for the evening news programme, Kent Tonight, on every day at 17.30, are huge. Louisa Britton has anchored the programme from her back garden. Proper public service journalism is the antidote to fake news.

Somehow, there is simultaneously a lot going on, but reporters are all chasing the same few officials for comment. As in war, we ARE desperate to know what is ‘really’ going on. The big daily event is the government press conference in Downing Street at 5pm. Many of us also have also found compelling the White House press conferences, as the US President Donald Trump appears to unravel psychologically live on TV while musing about the merits of injecting or drinking bleach. But journalists attending these things in person or by video link worry that the press conference format isn’t set up to help them find out what’s really going on behind the official, endlessly repeated, talking points. There’s been criticism of UK journalists such as Laura Kuenssberg that her ‘shouldn’t you apologise’ style of questioning is not what the public wants and is unpopular with Ministers. Some commentators think there’s no point in covering this kind of event at all. Jay Rosen at New York University has argued reporters should boycott the Trump ‘pressers’. That they are just there to deliver propaganda to help him get re-elected in November. The New Yorker journalist Michael Wolff asked the same thing during the first Gulf War in 1991 about the US coalition press conferences.

Producing quality news has never been more important. By coming to study at the Centre for Journalism, you will be part of it.