Two in Two’s is a new CARC blog interview series that intends to provide short but concise interviews, which offer a highlighting understanding of the work and life experiences of CARC co-operators, and friends. Using two guiding questions, these interviews translate to a reading-time of roughly 2 minutes. This time in the Two in Two’s CARC presents:

Dear Maddy, please describe the current situation in Calais while emphasising trends and shifts you are witnessing regarding the border regime of the UK and France.

Maddy: Since the “Jungle” was evicted in October 2016, a camp that had over 10,000 people in it, there has been a fluctuation of population living across the border zone of France, predominantly between Calais and Dunkirk.

At present, there are approximately 1500 displaced people between Calais and Dunkirk (significantly more if including the entire coast up to Belgium). They are living outside in what one would generously term “make-shift tents”, meaning festival style pop-up tents usually on the sides of roads, landfill sites, in industrial zones and living under bridges of motorways. About 200 out of this population are unaccompanied children, with the youngest just being eight years old.  Currently, the majority of the population at Calais are coming from Sudan, Eritrea, Afghanistan with lots of many other smaller minority populations, everywhere from Chad to Mali, Guinea to Iran, Egypt, Ethiopia. In Dunkirk, it is predominantly Iraqi-Kurdish with about 500 people sleeping outside every night.

What we are witnessing is rapid and severe deterioration of living conditions as the [UK] hostile environment is exported to the border zone with very high levels of police violence, state surveillance, lack of any adequate shelter or support, lack of access to legal information, no adequate support for unaccompanied children or legal roots of passage. What is particularly unique at this time of the year is, usually there would be some emergency accommodation put up for the winter to allow people to sleep inside and this hasn’t happened this year. All of the population are sleeping outside this winter and we are seeing higher numbers of hypothermia and mental collapse due to the living conditions.

This non-provision is due to the very clear mandate of both states [UK and France] of not wanting a displaced refugee population to live in Northern France, which goes against the realistic trends of migration that have been always prevalent in this crossing-point region. This is connected to an increasing securitisation, which meant that the living conditions have deteriorated – but that doesn’t stop people from travelling. So, we know that this debate of questionable rhetoric is not helpful to stop but is causing people to live in these conditions.

So please explain what you and Help Refugees are doing in Calais, while highlighting how students can support you.

Maddy: “The majority of response in Northern France is provided by grassroot or civil society groups, some of which are French and some which are British, and they are bringing a whole range of support. From firewood provision, hot food, material aid, specialist services for women and children as well as unaccompanied minors, legal information to Wi-Fi and phone chargers. The whole host of it is delivered by day-to-day volunteers.

Help refugees works as a funder and supporter of partner organisations, so all of our partners do need voluntary support, donations in material form, whether it be sleeping bags, tents, or food donations. People can get involved by checking the help refugees website and looking at our ‘Volunteer in Calais’ page or going through indigo volunteers, a website that helps to match-up people with specific projects. From here you can get involved with a wide number of projects including the Calais Woodyard. For Refugees Community Kitchen there is no minimum time period of volunteering and they’re always in need of an extra pair of hands! (Please check out their website to see how to get involved). 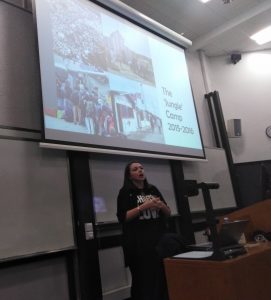 So, for people living in Kent, if you got a free weekend there are lots of Facebook groups where you can go on a lift share and head over to Calais for less than 10 pounds and just chop vegetables or wood for the weekend. There are other services such as working with the Refugees Women Centre or with “Project Play” that supports very young children – they will require a minimum time period sometimes which would be 2 months. So, depending on the time people got, there is a lot to do and to help.

This interview was conducted as a part of the event “Human Rights Abuses on the UK/French Border” which took place on the 30th of January 2020.