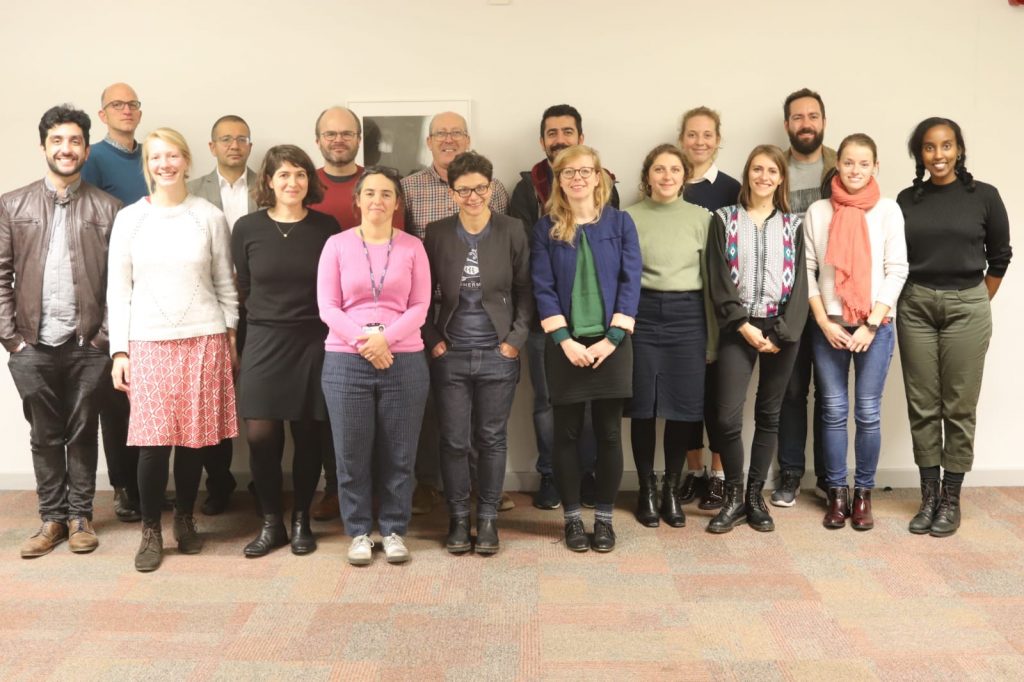 On Friday, the 15th November 2019, the Conflict Analysis Research Centre (CARC) organised a joint research workshop in partnership with the Centre for Conflict Studies (CCS) from Marburg, Germany. This workshop was the first event of a hopefully arising tradition of research collaboration between the institute of the University of Kent as well as the Philipps-Universität Marburg. In consequence, the day-long event was devoted to interdisciplinary and international research cooperation between both institutes.

Beginning with warm words of welcome by the CCS director Prof. Thorsten Bonacker as well as former CARC director  Prof. Feargal Cochrane, the audience received insight into both institutes, their current research projects and how this collaboration was anticipated and wished for in a long time. Professor Cochrane emphasised the spirit of CARC and its founder John Burton – to provide up-to-date research that is closely linked to real experiences – thus giving pragmatic, evidence-based advice and approaches to global processes of conflict and peace building. This was closely mirrored by the intentions of the Centre of Conflict Studies, which Professor Bonacker presented as a product of a network of researchers interested in the structural, organisational and psychological components of conflict analysis. In addition, this collaboration, both in form of the well-established joint “Peace and Conflict Studies” degree and now this workshop, were emphasised as the fruit of Hugh Miall’s idea for an international, practice-related degree and research. In consequence, this workshop can be considered as standing in a long-intended culture from both institutes.

Divided into four panel sessions, each scholar was given the opportunity to share their current research projects and open it for criticism, ideas, and commentary. The first session, which was entitled “Exploring Institutional Reform in Deeply Divided Societies”, was opened with Prof. Cochrane’s critical contribution regarding the impact of Brexit as an “exogenous shock” complicating the conflict in Northern Ireland. Thereby, Prof. Cochrane gave the participant a small taste of his extensive analysis and assessment of the contemporary North Irish conflict in the light of Brexit, which will be published in his upcoming book around May 2020. This session was followed by an innovative research proposal by Dr Stéphane Voell, a trained anthropologist from the Centre of Conflict Studies. During the presentation of his work, which intends to trace the concept of imitation of statehood, Dr Voell allowed the audience a brief but intricate insight into the puzzling case of Abkhazia – a non-recognised semi-state at the border between Russia and Georgia. His research proposal formed the basis of a rich discussion concerning the comparative analysis of what he would call “the construction of a normal state in a non-normal state”. The third contribution in this first panel was given by Prof. Thorsten Bonacker, who introduced the audience to his current research regarding the UN trusteeship system under the light of critical government studies. His historical and longitudinal analysis provided a critical reassessment of the trusteeship system as a measure of international governing and extended the disciplinary discourse with a Foucauldian perspective. Dr Nadine Ansorg closed the first panel by presenting her current collaborative research project concerning the justice system reforms in post-war societies. Her large-scale, quantitative analysis of formal and informal judiciary mechanisms in Sub-Saharan Africa was presented to tackle the quantitative research gap within the security studies sector concerning post-conflict areas, thus opening the debate to innovative methodology usage for traditionally qualitative concepts.

After a short break, the workshop participants, a heterogeneous group consisting of scholars, researchers and students alike, presumed with the second panel entitled “Fractures, Coalitions, and Acceptance in deeply divided Societies”. In this section, Kent PhD student Duygu Ozaltin propositioned to the audience her doctoral research project in understanding the complex relationship between the movement of refugees and asylum seeker and their management within the institutional landscape of the UK. During her presentation as well as the following discussion, different conjunctures of refugees and asylum seeker and the role of drivers for displacement were critically addressed, possible directions for further research were highlighted. This was followed by a presentation from Prof. Darius Zifonun, elaborating his current research interest in the local production and maintenance of conflicts. Embedded as a thematic core section of the Centre for Conflict Studies, Prof. Zifonun discussed with the audience the different dimensions of conflict, their complex character and their interaction with internal and external components. In the third presentation of this second panel, Marburg PhD student Tareq Sydiq shared his original analysis of opposition building in Iran. Investigating the potential for different oppositional configurations within authoritarian regimes, Sydiq emphasised urban planning as measure for spatial conditioning. This panel was concluded with a presentation by Dr Yaniv Voller, who was regarding the role of defector militias in action as governmental collaborators. Dr Voller informed the audience of his current research results, which place defector militias in counterinsurgency operations and thus establishes the ground for their assessment in terms of use, tactics and function.

The workshop proceeded with the third panel, which was headed “Differences, Preferences and Support of Citizens in Deeply Divided Societies”. Beginning with a presentation by Marburg PhD student Miriam Tekah, the audience was introduced to her current project which analyses social interactions that are relevant for conflicts. Using the cases of Quebec (Canada) and Casamance (Senegal), Tekah exemplified her research of understanding these mechanisms based on perceptions within secessionists conflicts. This rich contribution and discussion were followed by an insightful presentation by Dr Sudulich and Dr Morgan-Jones on a project jointly conducted with Profs Cochrane and Loizides. Their large-scale, survey-based analysis provided critical and policy-relevant results concerning the question of arrangement preferences for boarders in divided societies. Both researchers discussed with the audience their various models of cross-boarder cooperation, arrangements and citizenship allocation with empirical evidence coming from North Ireland. This fruitful discussion was further expanded with the final presentation of the third panel provided by Prof. Loizides from CARC. His presentation, which included a further dimension of this representative research project, emphasised the potential of diaspora involvement for peace settlement and preference formation. Elaborating on the cases of Northern Ireland and Cyprus, Prof. Loizides and the audience discussed his model to test realistic preferences and their impact, taking his proposal of ‘packages of compromise’ into account.

The last session entitled “Critical Perspectives on Conflict and Security” contained two presentations, by Dr Maria Ketzmerick and Dr Harmonie Toros. Focussing on critical security studies, Dr Ketzmerick presented her research regarding securitization dynamics of post-colonial realities in francophone Africa. She propositioned her analysis based in archival work and records of decolonizing Cameroon and thereby introduced the audience to a nexus of postcolonial studies and security studies. This critical perspective was advanced when Dr Toros shared her essayistic investigation of violent power dynamics in international relations and intervention. As she described her experience of participating as one of many international actors based in Mogadishu International Airport, also commonly known by the Somali population as “”, Dr Toros enabled the participants an intricate but unsettling inspection of abusive power relations between the ‘international’ and the ‘local’, as intervention operations become embedded in systems of logistics and function. The collaborative workshop provided an extensive demonstration of the rich and diverse research landscape between CARC and CCS. This workshop enabled researchers and participants to share profound findings of scientific significance and social as well as practical relevance. Most importantly, it opened the door for further interdisciplinary, international and interinstitutional cooperation between the institutes.

We are thanking all students, scholars, researchers and workshop participants for their valuable contributions and are looking forward for further research partnerships between Centre for Security Studies and CARC!