On the occasion of National Poetry Day on 3 October 2019, our postgraduate students Tara Cranna and Arrliya Sugal spoke with Steafán Hanvey about his poetry, his childhood memories, and ‘the Troubles’ in Northern Ireland

With a growing awareness of highly contested conflicts, the importance of inter-field cooperation has often been highlighted as being essential. Whether it be the alliance of economists and political theorists, social workers and artists – there may be more tools than one initially suspects in the journey towards peace. Steafán Hanvey offers insight into the use of creativity and art when dealing with the memory of conflict through his multimedia projects remembering the Northern Irish conflict, ‘the Troubles’. Reconstructions, published in 2018, is a combination of photos taken by his esteemed ‘fathographer’, Bobbie Hanvey, and poems written by Steafán himself – remembering his childhood in Northern Ireland during the 1970s. Though coincidental for Steafán, the publishing of the project aligned with the 20th anniversary of the Good Friday agreement and thus quite fittingly striking a nerve in regards to current political debates in the United Kingdom. While it may be a very personal project for Steafán, as he was often present with his father as photos of the conflict were taken, it is nonetheless important for students of political science to study projects such as Hanvey’s in order to gain a more substantive insight into the conflicting and yet simultaneous realities that exist in deeply fragmented Northern Ireland. 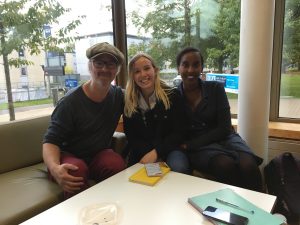 Steafán explains the birth of this project being an emotional reaction to a photograph of their shared experiences, which he received from his father and him enjoying “the process of looking at a photograph and responding to it, to see where it would take me”. He found himself responding to the photo through a poem, using his words to recall these unique memories shared between him and his father. Despite it being initially a coincidental collaboration between his father’s work and his own, the project grew to be an intuitive ongoing process in which not only the memories of ‘the Troubles’ but also their family history were recalled.  These insights gathered in Reconstructions thus not only show a snapshot of Northern Irish history but Steafán’s own retrospective awakening in regards to his experiences during this harsh political climate as a child. In our conversation, Steafán recalled the moment in which he first became aware of the exact “time and place” in which he was living as a 9 year old. He references a song by a fellow Northerner called “The town I loved so well”, written about the increasingly violent outbursts in (London) Derry. He recalls the time when he “listened to it about 10, 15 times, because it was just so haunting, that’s when I started to connect some of the dots“, thus crediting this song with opening his eyes to the conflict that was ongoing at the time.

When asked about the potential lessons learned from the recalling of past memories, Steafán engages critically with the role and accuracy of such, as he reflected,  “memories what are they? At best they are ephemeral…which is why I used the word ‘impressions’, because they are foggy”, thus highlighting the need for self-awareness when contemplating upon past conflict.This evaluation becomes an essential element in the attempt to overcome troublesome experiences shared by the many communities involved.These individual stories and memories, as Steafán feels, lead to different narratives that are trapped in a “fog” and the truth can only be found with the transgressing of these frontiers.  Clarifying the fogginess of memory so often felt by individuals of such deeply entrenched, divisive conflict such as ‘the Troubles’ is a primary objective of Steafán’s work, as he hopes to “invite people in to look at other narratives” of the conflict. It is also these narratives, some full of conflict but also full of community and hope that lead Steafán to explain to us the importance of recognizing the “anomalies that exist in a place like Northern Ireland” – not all good, not all bad, not all orange or green. The act of reconciling the gaps inherent in Irish society thus becomes evident in embracing the different tones (“the many different greys”) that represent their truths. As an artist, Steafán thus recognizes the subjective and sentimental nature of this art and reflected on the possibility of finding one’s own significance within the project. The amalgamation of such individual memories consequently feeds into a larger mosaic of commonality.

To conclude, the collaborative work exhibited in Reconstructions and captured in the performance given at the university through CARC, highlights the tones that coloured the time of ‘the Troubles’ and the striking resemblance they bear to current times. The project emphasizes the relevant and recurring nature of the Northern Irish conflict, particularly its paradoxical layers embedded within. This illustration allows for an intimate look into the realities of family life, friendships, love, art and memories in the daily lives of the people of Northern Ireland. Ultimately, we feel that the striking photographs taken by Bobbie Hanvey, elevated with the beautiful poems and music of Steafán, remind us of the, maybe only, genuine truth in conflicts… That nothing is ever clear cut, gone or here, orange or green  – it always lies in the in-between.

You can find more information on Steafán’s work and purchase his latest book here.