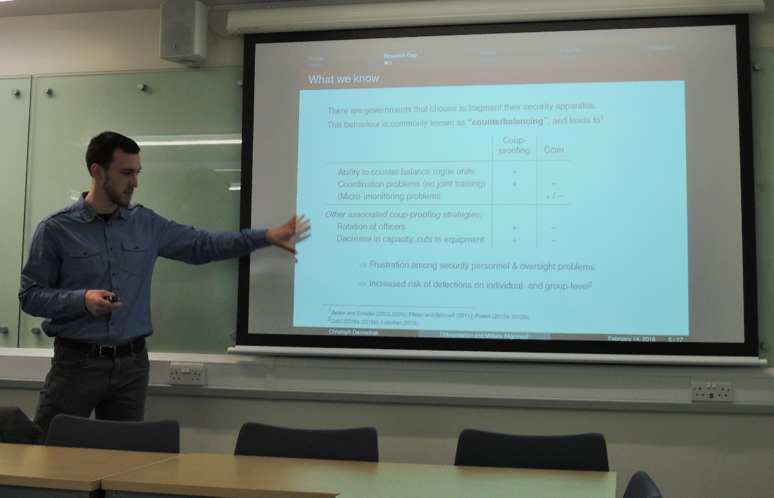 On Wednesday the 14th of February, Christoph Dworschak (University of Essex) presented his current research on ‘Jump on the Bandwagon: Differentiation and Military Alignment during Conflict’ at the CARC research seminar. In his research, Dworschak looks at ‘what determines defection’ but focuses on one specific aspect of this question, namely defection caused by fragmentation. Fragmentation of military can be due to two possible reasons. The first is for the purpose of coup-proofing, that is to prevent uprisings from within the military apparatus. Possible strategies include counterbalancing, rotation of officers and a decrease in military capacity. This type of fragmentation tends to increase frustration among the military personnel and leads to higher rates of defection. At the same time, it decreases the country’s counterinsurgency effectiveness. However, it is the second type of fragmentation that forms the focus of Dworschak’s study. Some countries use fragmentation not for coup-proofing but for specialisation. These countries tend to have low risk of coups and retain high counterinsurgency effectiveness. Dworschak terms this form of fragmentation ‘differentiation’. The aim of his research is to determine if differentiation equally leads to defection. According to his main hypothesis this should not be the case because differentiation, unlike coup-proofing increases effectiveness and causes less frustration among the military. The focus of his current study is on India, but during the discussion with the audience it became clear that India might be an outlier case and Dworschak will extend his research to construct a global data set. His findings will show if the empirical analysis supports his argument and we look forward to reading the outcome.