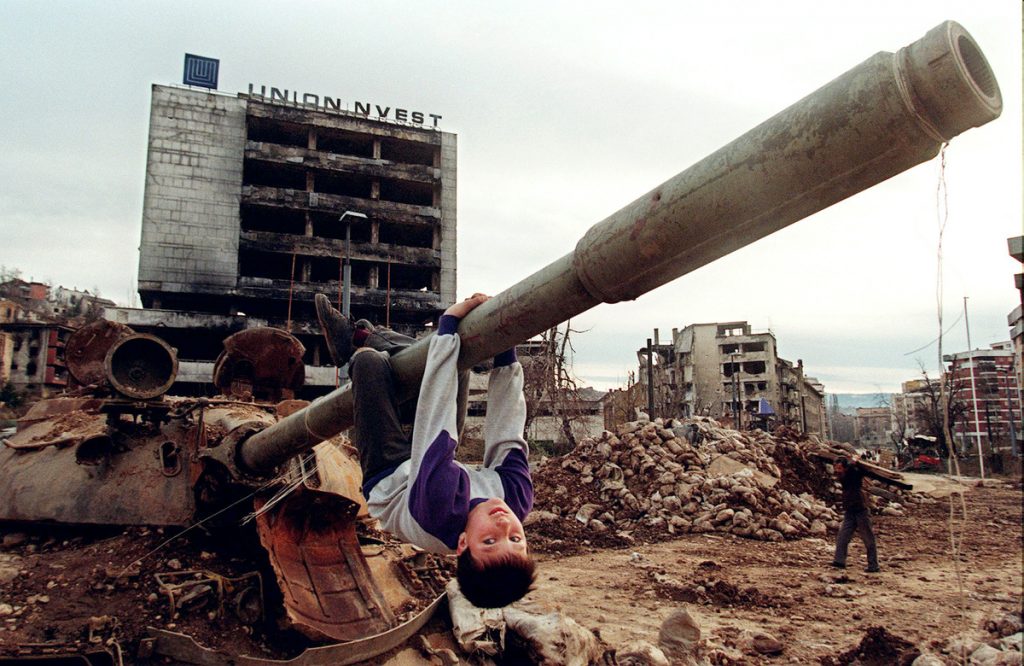 This blog series will concentrate on mapping different conflicts to gain a brief insight into complex conflicts. Conflict mapping is an invaluable tool for practitioners of conflict resolution, allowing a comprehensive view of the dynamics and context of a conflict. However, in practise it suffers from several limitations, which must first be resolved in order to effectively and responsibly utilise mapping as an analytical technique. By first considering the rationale for mapping, I will outline a basic conflict map of the Bosnian War, using this as a lens through which to conduct an appraisal. Following a brief reflection on how its limiting factors may have played a role in later developments in Bosnia, I offer the conclusion that we need to ‘broaden’, ‘deepen’ and ‘lengthen’ our approach.

Following the breakup of Yugoslavia, and the independence of former Yugoslav republics Croatia and Slovenia, Bosnia holds a referendum and declares independence. A melting pot of ethnicities with cross-border ties and a history of antagonism, causes fear and suspicion to grow. Aided by Serbia, Bosnian Serbs reject the newly independent state of Bosnia, along with its Muslim president, and undertake aggressive actions to establish an independent Serb republic. A civil war and campaign of ethnic cleansing begins.

Conflict mapping provides several benefits such as the consolidation of masses of information, the ability to link elements, and to recognise opportunities and constraints. It also identifies where external support may be necessary.[5] However, there has been nominal self-reflection and critical understanding of the endeavour.[6][7]

Most conflict analysis practitioners focus on the nation-state.[8] The priority of macro level considerations, disregards vital information at the micro level, such as the roles, incentives and constraints of individual actors.[9] In Bosnia, these assumptions missed the key role of individuals such as Milošević and Mladić, who were instrumental in the war’s mobilisation.[10] State-centrism induces focus on standing armies, but in Bosnia fighters were often civilians, with divergent motivations.[11] There is also a tendency to grant only a cursory observation of victims, with death tolls disaggregated only by which ‘side’ the bodies belong to.[12] This approach also ignores the role of gender.[13] Considering the extreme number of rape-cases in Bosnia, inclusion of such information could have aided prevention or post-conflict rehabilitation.[14] Additionally, negative consequences are not only the purview of those directly targeted.[15] Remnants of war, shattered economies and destroyed infrastructures affect all, but there is a tendency to ignore these indirect victims, overlooking critical areas for post-conflict rebuilding.[16] Finally, and crucially, the role played by NGOs and other peace actors themselves is typically neglected. Which has led to false assurances, diminished responsibility and lack of co-operation on their part.[17]

So why has this occurred? We can first consider the role that organisational agendas play. Some organisations involved in conflict analysis claim their frameworks to be objective and uniformly applicable.[18] Others, however, have recognised that this “toolkit” approach favours a “particular worldview”.[19][20] Inherent in this, is the risk that analysts may provide misleading information or favour cost-effective measures.[21][22][23] A less malevolent explanation lies in the global transitional period that the 1990s occupied, and the “New Wars” theory of which Bosnia represents a prime example.[24] Arguably then, analysts were working with an obsolete framework that did not make apparent the importance of some missing elements. Regardless, mapping’s limitations are not only its exclusions.

A further impediment is that proponents claim to map the dynamic relations between actors, context and issues.[25] However, in truth we only have a snapshot of a conflict in time.[26] Instances such as the brief retreat of the Bosnian Serbs, the evolution from war entrepreneurism into genuine ethnic tension, and the changing nature of Croat alliances over time, all represent missed opportunities, or potentially “ripe moments” for intervention, that could not be captured in a snapshot.[27][28] An additional failure is the ability to differentiate between needs, interests and positions.[29] This can lead to failures to find positive-sum gains between conflictual parties and an inability to explain seemingly erratic behaviour.[30] Lastly, the issue of misdirected focus. For example, the primacy placed on the proximate causes of war (Bosnia’s independence declaration), presents the Bosniaks as antagonists, while contextual factors are positioned as secondary historical background.[31]  These failures to properly understand conflict dynamics, combined with the aforementioned exclusions, provide insight into later developments in the Bosnian war.

In the summer of 1995 more than 8000 Bosniak men and boys were killed near the village of Srebrenica, a UN “safe area”. Evidence suggests that a combination of the lack of analytical co-ordination and responsibility of NGOs; disregarding the specific targeting of men; oversight of the destruction of cultural markers (e.g. mosques); and inattention to Serbia’s proximity, all played a role in the international community missing the cues of genocidal intent and permissible factors.[32][33] Similarly, the “Markale Massacres”, which finally drew a decisive international response, would not have been surprising had there been a less static view of the war, taking account of the daily shelling of Sarajevo.[34] And of course, had there been no arms embargo (perhaps a result of the primacy that proximate factors took), might the Free Bosnian Army have reclaimed territory much sooner avoiding these disasters at all?[35] Finally, the reified position the false narrative of “ancient hatreds” took, engrained itself in the peace process. The Dayton Accords cemented ethnic segregation and left Bosnia with a divided and malfunctioning political system, characterized by what Galtung would call “negative peace”.[36]

By broadening I advocate a joint analysis between practitioners and across sectors, avoiding particular priorities and biases.[38] Furthermore, it should also consider local priorities and make more use of local sources of information.[39] Deepening involves the need for further disaggregation, to provide more nuanced information of demographic factors in the conflict.[40] Additionally, there should be an emphasis on interaction between elements with none being prioritised, avoiding the risk of time-sensitive truths becoming entrenched as permanent “facts”.[41] Finally, a lengthening of conflict analysis. Much of the new literature identifies the need for conflict analysis to be dynamic, with consistent monitoring, and provisions to update as facts change on the ground.[42] Some organisations have even stated the necessity of pre-emptive analysis prior to the outbreak of violence.[43] As well as countering the static nature of analysis this may allow for preventative measures to be carried out at the latent or emergent stages of conflict.

Before concluding I will justify some limitations of this work. Firstly, the conflict map of Bosnia I provide is extremely basic. The motivation for this paper however, was to offer an appraisal of mapping and so the map is only intended to be illustrative. A bigger ‘sin’ is the somewhat tautological nature of which information I include within the map. In defence of this is the fact that political and security concerns means that actual maps are generally not published.[44] The information I include however is reflective of understandings at the time.[45] Any information pertaining to more recent understandings would therefore rely on hindsight and as such, be anachronistic. Finally, whilst my section on ‘implications’ may appear to be speculative these charges rest on recent evidence and contemporary understandings of the war.

In conclusion then, conflict mapping provides us with the possibility of gaining a deeper understanding of the dynamics of a given conflict. However, it is limited by its static nature, it’s practical assumptions and its lack of co-ordination. Furthermore, it is guilty of missing key information. As such I recommend a three-pronged approach to refinement: a broadening, a deepening and a lengthening. This will allow us a better understanding of conflict, the expanded capacity to identify key developments, and the ability to better prescribe preventative, mediative and reconstructive measures.

[30] R. Fisher and W. Ury, Getting to yes negotiating an agreement without giving in (London: Random House Business Books, 2012).