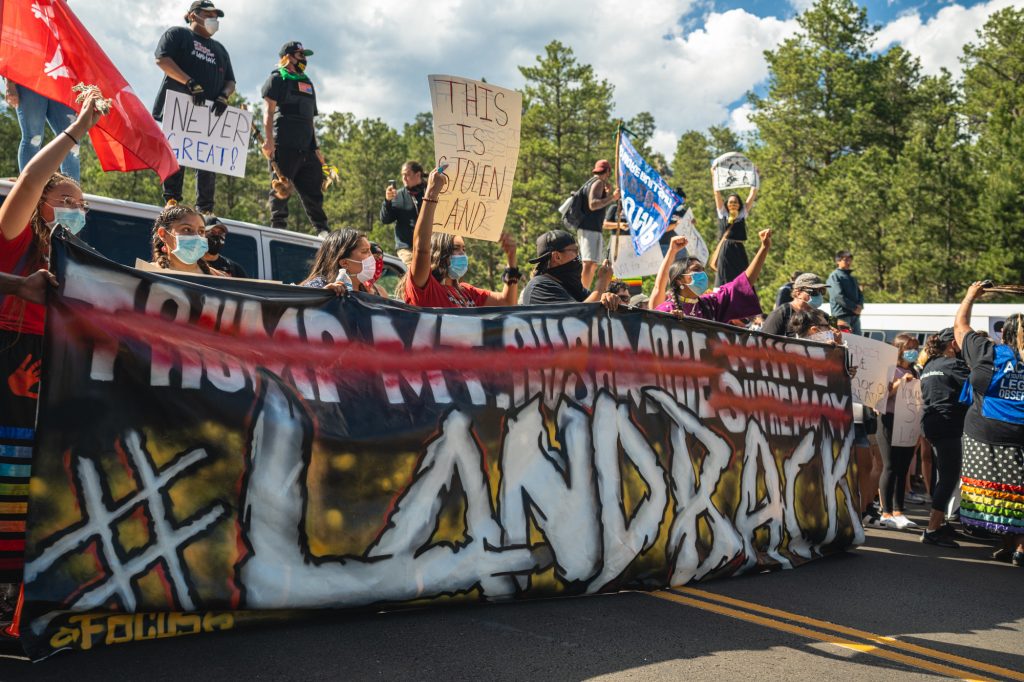 Here is our latest blogpost by Kate Rennard

Earlier this month, the state of Minnesota took the unprecedented step of returning land to a Native nation. The Lower Sioux Indian Community took possession of approximately 114 acres, including the Lower Sioux Agency site that was “the last place our Oceti Sakowin were gathered before being expelled from the State” in the aftermath of the 1862 U.S.-Dakota War. As Cheyanne St. John, the Community’s Tribal Historic Preservation Officer, noted, “Here we are generations later, reclaiming the land which holds the memory of who we were and our experiences. Now, it’s time to heal.”[1]

This is the latest success in the #LandBack movement, which garnered global attention last summer as Indigenous protestors blockaded roads in the Black Hills, calling for the closure of Mount Rushmore and the return of the lands to Native peoples.[2] As many of the activists involved have pointed out, the movement has a long history in Indigenous peoples and nations resisting attempts to take their lands.[3] However, some have criticized the movement, arguing that it will never be possible to give land back and that Native peoples should just “move on.” As one British activist, Joshua Y. Jackson, tweeted in late January: “There’s no-one to give the land back to – Imperialism left old nations dead and buried. Must go forward, not back.” He insisted that the “settler project in America was completed about two hundred years ago” and that Native nations with “their own historically defined territory (not the reservations gifted to them by the US state) [and] their own languages do not exist today.” This stance not only oversimplifies the #LandBack movement but also shows a lack of understanding of Indigenous histories in what is currently Canada and the U.S.

For many Britons, Indigenous North American nations and peoples seem a distant concern. Their histories are barely touched on in primary or secondary school classes and what is taught – most often the “end of the Indian Wars” in the 1890s – can serve to reinforce stereotypes about the disappearance of Native nations and peoples.  In this blog, I want to break down some of the most common misconceptions that also appeared in the above-mentioned tweets.[4]

“The U.S. has won so Native peoples need to move on.”

There is an idea that the settler colonial project in what is currently the U.S. has been “completed.” Some people claim that this happened about 200 years ago, at the end of the American Revolution, while others locate it with the events at Wounded Knee and the “end of the Indian Wars” in the late 1890s. Certainly, at both these points, the U.S. state was trying to gain control of what it considered its national borders, as well as the Native nations whose borders lay within that nation-state or transcended it. But this project was more complicated than the U.S. initially thought it would be and than the prevailing narrative of U.S. history portrays. Native peoples did not disappear; over the next 200 years, they continued to assert their identity as Native peoples, even when they adapted to U.S. customs, and they continued to resist efforts to extinguish their sovereignty or their right to self-determination in a variety of ways.[5] Also, the idea that settler colonialism in the U.S. is “complete” obscures the fact that Native nations are still fighting against losing their lands today. For example, the Wampanoag nation in what is currently Massachusetts had to initiate legal proceedings against the Department of the Interior in March 2020 after the DOI ordered their reservation disestablished.[6] Even though today many consider the U.S. to be firmly established as a nation-state, the position of Native nations continues to complicate this.

“Their reservations were gifted to them by the U.S. state”

Native nations were NOT gifted their reservations. These lands are often parts of their original tribal homelands. As sovereign nations, they ceded land to the U.S. through treaties (land was also stolen from them, including through deception in treaty negotiations). As part of these treaties, Native nations reserved lands and often rights (fishing, hunting, mineral rights etc) in the lands they had ceded. These were not gifts given to them by the state but rather rights and lands that those sovereign nations retained for themselves in legally binding treaties.

“Native languages do not exist today.”

Indigenous languages are under threat globally but that doesn’t mean that they don’t exist. There are many initiatives under way to protect and revitalize Native languages in what is currently the U.S., from prioritizing vaccinating speakers against COVID-19 ( https://www.nbcnews.com/news/us-news/native-americans-use-culture-community-gain-tribes-trust-covid-vaccine-n1256647), to language programs (https://www.wlrp.org/), to publishing bilingual children’s books, such as Ojibwe historian and author Brenda Child’s BowWow PowWow (https://www.youtube.com/watch?v=luXF84pESNE). Native peoples are also using social media and other digital platforms to encourage people to learn their languages.

Perhaps one of the most damaging misconceptions about Indigenous North Americans that Jackson illustrated in his tweets though is the idea that Native nations are only really Indigenous if they exist now as they did pre-colonialism. First, this presupposes that Native nations did not change in the thousands of years before European settlers arrived in America; it freezes their existence in one historical moment and ignores the dynamic peoples and cultures of precolonial America. For example, did you know that in the 15th Century, Inuit peoples in what is currently Alaska were part of global trading networks that meant they were in possession of Venetian glass beads from Italy? (https://news.uaf.edu/blue-beads-in-the-tundra/) Or that in the 13th century, Cahokia, a Mississippian city close to what is now St Louis, had a population that exceeded London’s in the same period?

Secondly, this misconception, taken with the others listed above, consigns Native nations and peoples to the past, as somehow incompatible with the future, since they seem destined to become (or have already become) part of the U.S. state. The #LandBack movement is an important correction to these misconceptions with its focus on what is possible for Native nations and their futures. As Nickita Longman (George Gordon First Nation) said, “Landback, to me, means a combination of a return to things while also taking into account the ways in which Indigenous people have evolved into the present and how we will continue to evolve into the future.” Likewise, Hayden King (Beausoleil First Nation) has argued, “there’s this naturalization that the land is already gone, and there’s nothing that can be done about it. And we know that’s not true…There are all these communities out there that are actually getting [land] back. Highlighting those stories, I think, is important to show communities that they can do that too.”[7]

Misconceptions about Indigenous North Americans have often affected Native residents and visitors to the UK and so it’s important that Britons learn about these histories. For example, Wonder Woman actor Eugene Brave Rock (Kainai) described his negative experiences in London with people who thought all Native peoples were dead.[8] Also, while sports teams at every level in the U.S. are beginning to retire their Native mascots, here in the U.K. the Exeter Chiefs have refused. The team continues to claim that their name and logo honours Indigenous peoples despite Native peoples living in the U.K. explaining how harmful it is.[9]

If there’s one narrative I’d like readers to take away from this blogpost, it’s that Native

peoples have always adapted in a variety of ways to deal with changing conditions and difficult situations, including before contact with European settlers. They are not static cultures and, despite the changes wrought by colonialism, they continue to be, and assert their identity as, Native peoples. Colonization disrupted every aspect of Indigenous North American cultures from social relations, to health, to politics and to ways of making a living. Throughout all of this, Indigenous North American nations have demonstrated a constant ability to adapt and persevere and they have always maintained their sovereignty.

[2] While the US Supreme Court has declared that the US possession of the Black Hills is unconstitutional, they did not order the federal government to return the land.

[3] Nickita Longman, “The past, present, and future of the landback movement,” in Claire Elise Thompson, “Returning the Land,” Grist, 25 Nov, 2020, accessed 4 Feb 2021, https://grist.org/fix/indigenous-landback-movement-can-it-help-climate/.

[4] These will relate specifically to Native peoples within the contiguous U.S. borders.

[5] For more information on tribal sovereignty, what it is, and why it’s important, see Native Governance Center’s video, “What is Tribal Sovereignty?” here: https://www.youtube.com/watch?v=BOYcgvEU0V0

[7] Zoe Tennant, “‘There are alternatives to what Canada tells us is possible’: Hayden King on Indigenous land reclamation,” CBC, 29 Jan 2021, accessed 4 Feb 2021, https://www.cbc.ca/radio/unreserved/land-back-movement-to-reclaim-indigenous-land-grows-1.5891912/there-are-alternatives-to-what-canada-tells-us-is-possible-hayden-king-on-indigenous-land-reclamation-1.5893143.

[9] For more information and ways to help, see the Exeter Chiefs for Change Facebook page (https://www.facebook.com/ExChiefs4Change/) or Twitter feed (@ExChiefs4Change)