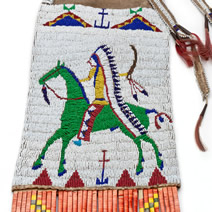 At the beginning of October 2020, Hastings Museum and Art Gallery in East Sussex, southern England implemented a new Indigenous Engagement Policy–the first of its kind in the UK–that was the result of collaboration between the Museum, Research Associate Jack Davy on behalf of Beyond the Spectacle, and a number of Indigenous North American contributors. Below, Jack Davy explains the process and the policy’s significance.

On 17thJune 2019, Mohegan playwright, actor and theatrical director Madeline Sayet gave a performance of her solo show, Where We Belong,as part of the biennial Origins Festival at the Globe Theatre in London, in which she described a tour of the British Museum. There she stands in shock, “looking at a mash of mislabelled indigenous objects, like varying nations crowded into a rail car –a continent facing genocide over hundreds and hundreds of years – wide exspanses of geography thrown together in cases without specific acknowledgement”. Almost overwhelmed by the impact of this experience she is “sorry I have nothing to offer the spirits crowding the building, mashed up against friends, enemies, and strangers who don’t understand them. I am scared to close my eyes and listen to the howling and pain around me. . . I wander away into an exhibit on clocks and stare at it for a while – to cleanse my body of all the stolen stories, and objects of violence in this place. I want to go home.”

Such a visceral reaction to the collection in a museum might seem surprising to the average British visitor or curator, but for Indigenous peoples these types of painful emotional encounters are common. For museum displays such as the one Sayet describes are not merely collections of historical objects, but the visible legacy of invasion, colonisation and genocide.

Sayet’s own Mohegan people for example were so devastated by disease and conflict in the early stages of European settlement in North America that even the meaning of her Indigenous name is unclear, debated back and forth by relatives “Acokayis” – does it mean Blackbird? Dead Bird? Maybe nothing at all? “because our language was killed and has to be resuscitated”.

Encountering evidence of this loss in a London museum space was very disorientating for Sayet, necessitating a contemplative, emotional encounter with the objects which was impossible in the modern museum environment. The play she wrote and performed at the Globe, was Sayet’s effort to work through this experience and her emotional response in a public forum, one in which her distress was given voice and could be acknowledged. The question which follows then is to ask how museums can provide a more sympathetic environment, which is able to acknowledge and honour Indigenous experience, and is more reflective of Indigenous agency and histories.

Already conscious of this problem, I have been investigating Native American engagement with UK museums for some time, following from my previous work with Indigenous collections at the British Museum and Horniman Museum. From early in the Beyond the Spectacle project, I began interviewing Indigenous museum visitors, building a database of their experiences, trying to determine what was going wrong in the ways in which these visitors, for whom these spaces mean the most, were interacting with UK museums – Sayet’s play stimulated me to attempt to apply these lessons in a practical environment.

I discovered that no museum in the UK had an established Indigenous engagement policy, and that well-meaning UK museum staff often

had no experience or training in how to engage with visitors seeking meaningful emotional encounters with potentially traumatic histories in their museum spaces. To run a pilot study to remedy this problem, Beyond the Spectacle teamed up with Hastings Museum and Art Gallery, which holds a large and important Native American collection, to develop an Indigenous Access Policy.

This was based on the themes, distilled from the interviews, of identifying the key answers to the questions 1) Where is the display in relation to the visitor? 2) What is missing from the display? 3) What complex histories lie behind the collections? And 4) What stories should be brought up to date?

Examining these thematic questions then led to the creation of a set of practical recommendations to support museums, particularly resource-limited smaller museums, in their engagements with Indigenous peoples. These recommendations are designed to lead to mutually beneficial lasting engagements, through intelligent cultural sensitivity and respectful collaborative communication, which take the emotional requirements of Indigenous visitors into account. Essential in developing this was the support of a number of Indigenous scholars and students with whom I worked closely, including Sayet herself and Mvskoke Creek scholar Taylor Norman, who has recently posted her award-winning dissertation on her own reactions to encounters with UK museums online here [https://www.academia.edu/44418648/BRIDGING_THE_DIVIDE_REEVALUATING_NATIVE_AMERICAN_DISPLAYS_IN_THE_BRITISH_MUSEUM_AND_HORNIMAN_WORLD_GALLERY].

These recommendations were developed into a formal policy document, which was reviewed by Hastings Museum staff and Beyond the Spectacle’s Indigenous partners, to produce a coherent guide to Indigenous encounters in the museums space. Finalised in the late spring of 2020, this document was submitted to the cabinet of Hastings Borough Council in early September and approved. It was formally adopted by Hastings Museum on 5thOctober, and is now the first and currently only formal Indigenous Access Policy in Britain [ https://www.hastings.gov.uk/news/latest/indigenous/].

As well as a guide for ethical and responsive museum engagement, this document is a pilot study for national policy and has been submitted to the Museum Association’s Working Group for consideration as they develop a co-ordinated national response to urgent calls for decolonisation. As such it is a living document, intended to be updated and amended as new evidence emerges through experience and national recommendations change.

The raw research which was used in this policy development will eventually be available via the Beyond the Spectacle archives, once the project has finished. It has already been condensed and synthesised into a short monograph that outlines why this is such a significant problem for Native American visitors, why the museums sector in Britain is struggling to manage its response in the face of funding cuts and aggressive rhetoric, and how the policy was developed with case studies for its application. This book, entitled Native Americans in UK Museum Spaces: Living Histories will be published as part of the Cambridge University Press Elements Series, in 2021.