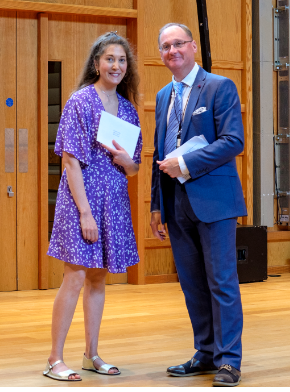 One of the highlights of Summer Music Week is the Music Prizes ceremony, an occasion to recognise the outstanding contributions made by some of those taking part in extra-curricular music over the course of the academic year.  This year saw the return to the in-person ceremony, which followed the annual Music Scholars’ Lunchtime Recital, and to welcome supporters, benefactors and guests for the first time since 2019.

The John Craven Music Prize: awarded to a returning student who has made a major contribution to music at the University, and this year was awarded jointly to Kammy Pike and Michael Lam. Second-year postgraduate in Biosciences and a Music Performance Scholar, Kammy Pike has led the Symphony Orchestra this year including in the annual Cathedral Concert, and also plays in the String Sinfonia, with whom she played the final solo movement of Vivaldi’s Spring in a recent performance.