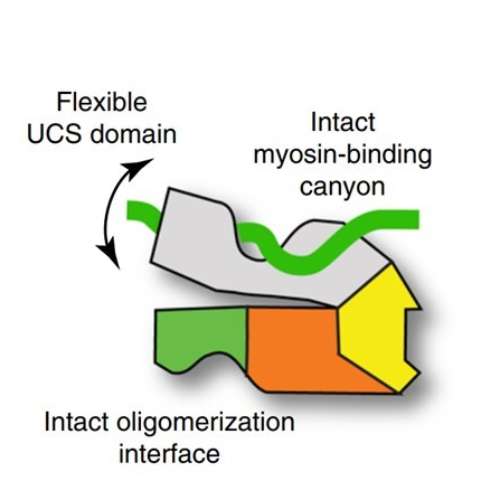 Professor Michael Geeves recent collaboration with the Vienna BioCenter has resulted in a Nature publication.

Proteins are made up of long chains of amino acids that fold up into a specific 3-dimensional shape. A ‘miss-folded’ protein is inactive and is a waste of the energy and other resources used in the process of making the protein.  In addition, some misfolded proteins can be toxic (e.g. Alzheimer’s and mad cow disease).  The process of folding can be quite complex and cells have evolved a group of proteins called chaperones to assist the efficient folding of other proteins into the correct structure or to help recover misfolded protein.  The major muscle protein myosin is one of the more difficult proteins to fold up correctly, and muscle cells requires several chaperones including UNC-45 to produce functional myosin.

The work described in our most recent paper is a collaboration between researchers at the University of Kent (specialists in myosin) and the Vienna BioCenter (specialists in chaperones), and uses myosin as a tool to assess the behaviour of the UNC-45 chaperone.  We discovered that one domain of UNC-45 is very flexible enabling it to recognise the unfolded myosin and assist the refolding process.   As part of the work we were able to explain why certain well known mutations in UNC-45 cause the chaperone to become inactive at high temperatures, stop generating functional myosin and so cause a loss of movement in the worm C.elegans.   As a bi-product of the work we learnt how to make large quantities of muscle myosin in the test tube using the UNC-45 chaperone.   This may assist future work to generate human myosins that carry mutations responsible for heart disease.