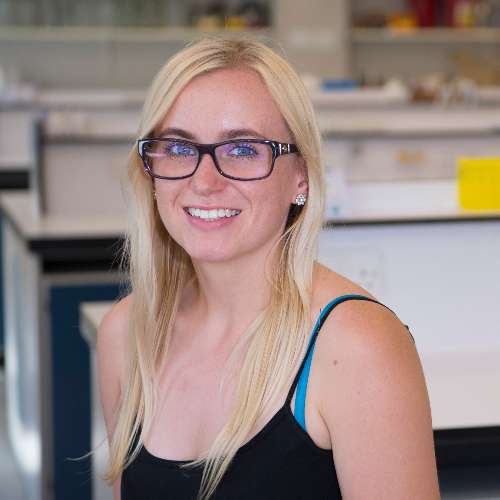 Congratulations to School of Biosciences PhD student, Chloe Johnson, who was recently announced as a winner of the Postgraduate Researcher award by the Graduate School.

The Director of Graduate Studies, Dr Campbell Gourlay was quoted as saying:

“In addition to her own experimental work Chloe has been a great team player within the Research Group and within the School. She has trained, mentored and supported numerous UG students, summer students and visitors to the laboratory.”

Chloe gives an insight into her research on Fast Kinetic Studies of Human Cardiac Myosin:

Hypertrophic cardiomyopathy (HCM) is an inherited cardiovascular disorder affecting 1 in 500 people in the UK population. In HCM, the muscular wall of the heart – the myocardium – becomes thickened, making the heart muscle stiff. This thickening makes it harder for the heart to pump blood around the body. It is also the leading cause of sudden-cardiac death in young adults. 40% of disease-causing mutations are found in a muscle protein called myosin. Onset of symptoms can begin in childhood (early onset) or in mid-life (late-onset). One of the biggest questions in the field is how can someone carry and live with a mutation into mid-life before displaying symptoms, yet show the same pattern of disease as the children who develop it in childhood? We set out to address this question by using a combination of protein biochemistry and computer modelling to understand the different behaviours between early and late onset mutated myosins. The results will help to further understand disease progression, improve early diagnosis, and will highlight potential therapeutic strategies.

As well as the myosin found in the heart, there are other types (or isoforms) of myosin within the body, and we wanted to understand how different myosins are adapted for their different functions. We used the same modelling approach to investigate the differences in biochemical properties of these different myosin isoforms. We used this information to then try and decipher why different isoforms of myosin move at different speeds. We identified different regions of the protein that we believe contribute to velocity, and then tested this hypothesis by changing some of these regions to make the myosin move at a different speed. We were able to make a human myosin move at a speed which is seen in the rat myosin!