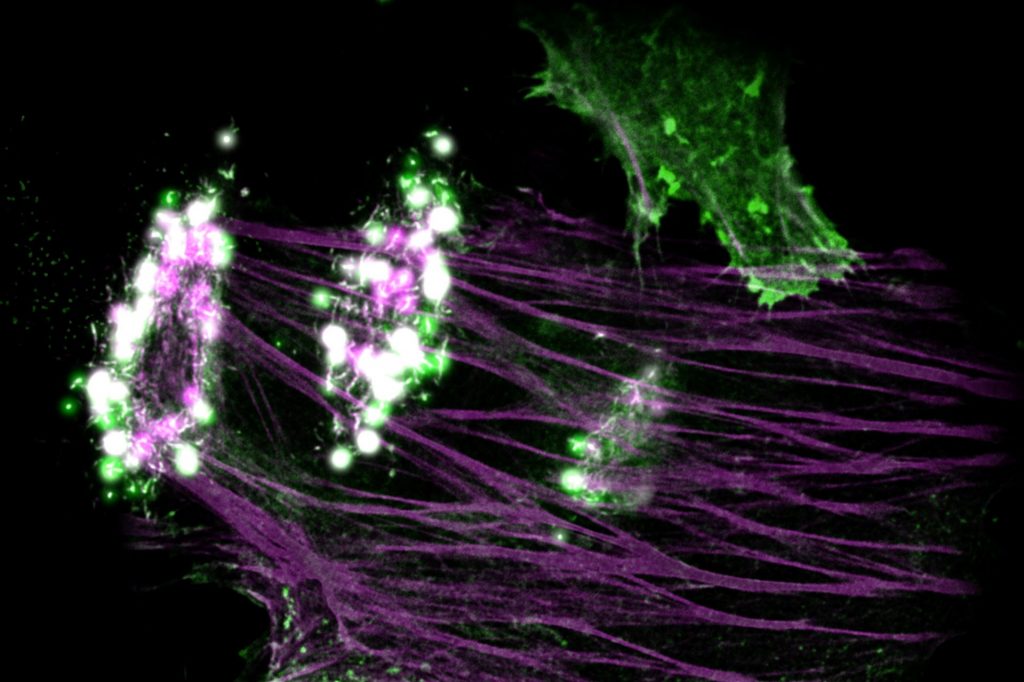 "Between Worlds image" by Skyla Bridges.

A new piece of music by renowned violinist and composer Anna Phoebe, inspired by research from the University’s School of Biosciences, will premiere on Friday 7 June.

The concert, entitled Between Worlds, will take place at the University’s Colyer-Fergusson concert-hall. The new work has been created in response to the spectacular visual imagery produced during research in the School of Biosciences, led by Dr Chris Toseland.

This research focuses on the conversion of the genetic code into cellular proteins. It is one of the most fundamental processes in living cells, but loss of regulation is linked to cancer. The researchers are using the images and movies created during this research to understand biological processes at the molecular level. With this approach, it is possible to learn more about how proteins behave in our cells and how this alters during disease. The research was funded by Cancer Research UK and the Medical Research Council.

In response to the images and movies created during this research Anna Phoebe has created a mesmerising 38-minute soundscape that features a choir, solo soprano, strings, solo violin, piano, synthesiser and percussion as well as sound recordings from laboratories where the research took place. This will all be played while the images that inspired the piece are projected behind the musicians, creating a truly unique and immersive live performance.

The piece will also feature the University’s Chamber Choir and String Sinfonia, and will be conducted by Deputy Director of the Music department, Dan Harding.

Professor Dan Lloyd, Deputy Head of the School of Biosciences said: ‘The concert is a unique opportunity to experience a new piece of work produced by a world-leading musician in response to academic research. It promises to be an unforgettable performance and demonstrates how scientific research can inspire creative outputs to engage audiences in innovative and thought-provoking ways.’

The concert will also feature performances of pieces that celebrate music for string orchestras, including works by Mozart, Tchaikovsky and Britten. Tickets for Between Worlds cost between from £5 – £12 and can be purchased on the Gulbenkian website.