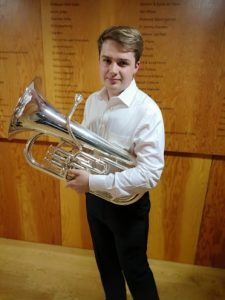 Euan Bonnar, is the featured student in our Scholars’ Spotlight. Euan is one of this year’s new Music Performance Scholarship students, and is playing with the University Concert Band and Pops Orchestra, as well as setting up his own brass group.

My musical journey began very early, aged four, with piano lessons at school. Although it would eventually become a secondary instrument later, I immensely enjoyed being able to learn and perform what were initially very complex pieces for such a small person. Looking back, it is easy to see that my love for the piano sparked my passion for music, with endless hours spent either hammering out scales or a wide variety of pieces. I vividly remember my eccentric piano teacher at the time handing me Bach’s ‘The Well-Tempered Clavier,’ telling me to take a look and play around with some of the pieces. Much of my early musical life was spent pursuing a solo venture, rather than any ensemble playing. The closest I got to playing with other musicians on the piano was performing in the Portsmouth Music Festival with my brother, who ironically is now a much better pianist than I ever was

As a biochemistry student in the School of Biosciences, I enjoy music as an extra-curricular activity as a way to stay in touch with my creative side between lectures and long periods of study. I take part in the University’s Concert Band and Pops Orchestra but have also formed my own Brass Ensemble to continue to play the type of music that I played in the brass. I am very grateful to be the recipient of the Music Performance Scholarship, which has allowed me to purchase a new euphonium to use at University and continue to fuel my passion for music alongside my studies.