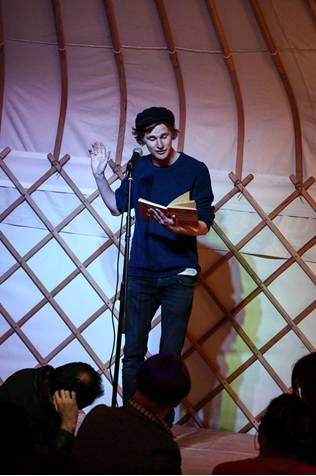 Henry Maddicott (Final year Drama student) has been celebrating his success at the 2017 Wise Words Festival Emerging Talent Final which was presented in partnership with Apples and Snakes, England’s leading organisation for performance poetry and spoken word.

Earlier in the year poets from around the country had the opportunity to apply for the opportunity to compete against each other at Canterbury’s Wise Words Festival. Out of the many that applied only six were shortlisted.  These included Henry as well as fellow Kent Drama student Jemma-Louise Burgess. The prize includes support from Wise Words and Apples and Snakes to produce an hour long show for next year’s festival. He will also receive three mentoring sessions with a high profile poet of his choice along with promotional material and the first pick of any upcoming writing workshops that they may be hosting.

You can find out more about Henry Maddicot’s poetry by clicking here.