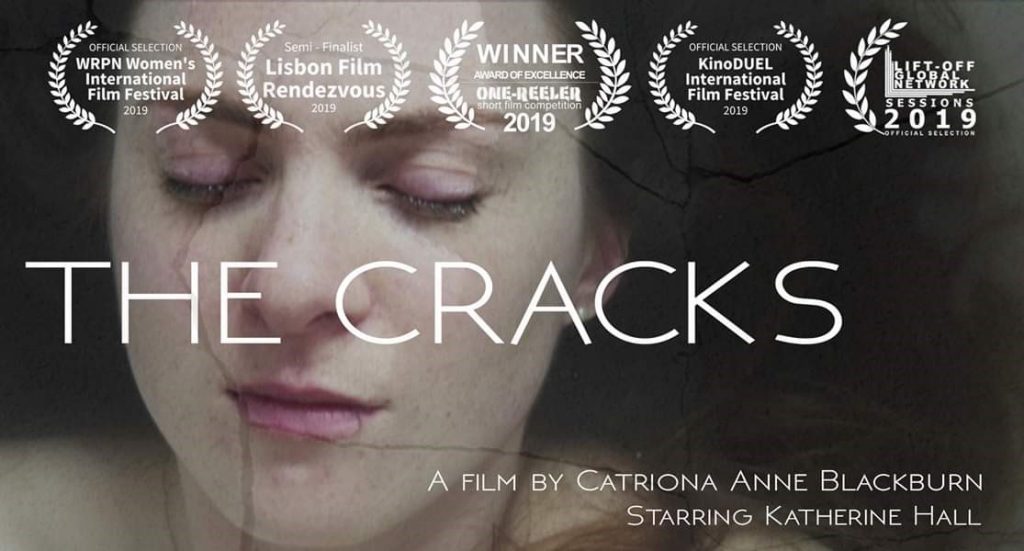 Catriona Blackburn, currently studying on the MA in Film with Practice, has had her short film The Cracks has been selected for inclusion in five film festivals: One-Reeler Short Film Competition, the WRPN Women’s International Film Festival, Lisbon Film Rendezvous, Lift-Off Global Network Sessions, and KinoDUEL International Film Festival. In addition, Catriona’s film has been selected as a semi-finalist at Lisbon Film Rendezvous and for the Award of Excellence at One-Reeler Short Film Festival.

The Cracks follows the emotional journey of Anna (Katherine Hall) as she copes with a violation; of her body, of her trust, and of her mind. As the cracks begin to show, only her little love, Tio, can save her from total self-destruction.

Catriona’s time at Kent started in 2011, first studying a BSc (Hons) in Anthropology, for which she received first-class honours. After a year of working with academics within the university and beyond as a visual anthropologist, Catriona came back to Kent to study for an MA in Film with Practice in the School of Arts.

Catriona says: ‘It was an incredible learning experience, our lecturers always discussed with a level and respect and humility that meant our opinions felt recognised and relevant. I have always felt that Kent offered me a freedom to speak my mind and explore my creativity. I felt I had found my niche in Visual Anthropology after my undergraduate studies, but with the support of the School of Arts, in particular my supervisor for the final production Richard Misek, and technician Daniel Haywood, I see many more opportunities for myself in the future. Completing this course has given me confidence in my abilities not only as an independent film maker but as a producer and distributor. I cannot quite believe how much positive feedback my first fiction film has received, and before it has even been graded!’

What’s next for Catriona? ‘I plan to complete my current projects this coming year; ‘Ableism in Academia’, ‘Embodied Reflection’ with Rambert School of Ballet and Contemporary Dance, and ‘Exploring Embodied Academic Identity through creative research methods’. Moving forward I hope to have the opportunity to produce films and documentaries, find funding for an experimental short using puppetry to speak about bereavement. I also have plans to make a feature documentary, showcasing the lack of support for new mothers and the onus on the mother’s responsibility within pregnancy and through to new motherhood, by following a group of pregnant women from different socio-economic backgrounds through into new motherhood’.

More of Catriona’s work can be viewed on her website:
www.catrionablackburn.com

More information about The Cracks can be found here:
https://misscatriona9.wixsite.com/thecracks/about