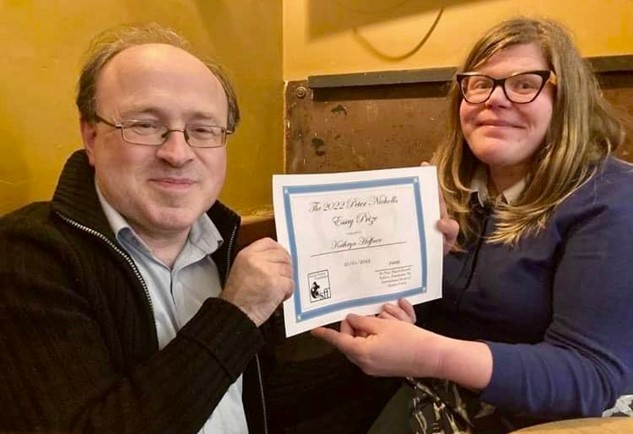 On International Women’s Day, we are delighted to announce that American studies PhD student Kate Heffner has recently been awarded the Peter Nicholls Prize by the SF Foundation, for her essay on the role of women in the development of the science fiction genre.

“My essay examines the role of women in post-war science fiction fan communities, and how they influenced not only fan practices, but the shaping of science fiction,” says Kate, describing her work. “I specifically look at how women formed passionate bonds with other ‘femme-fans’ (the colloquially term for women fans).” This work saw Kate delving through countless fan magazines, uncovering surprising and resistant narratives in the process. “These femme-fans often published radical subjective narratives about their role as women in science fiction fandom and expectations of their gendered labour in these spaces.”

The essay draws heavily on the PhD research which Kate is undertaking the Centre for American Studies, which takes a broader look at the influence of femme-fans and fan activity in science fiction clubs throughout the 20th century – a topic which has proven to be both surprising and enterprising. “Femme-fans were impacted by the reification of domesticity, the space race and the golden age of science fiction,” says Kate. “Furthermore, many of these femme-fans were impacted by debates on sexist framings of science and technology in fan cultures.”

Kate admits that she has always been a science fiction fan, having grown up steeped in stories of the strong women protagonists in science fiction media – particularly Sigourney Weaver’s timeless portrayal of Ellen Ripley in the Alien franchise. But Kate’s academic study of femme-fan’s influence in particular was inspired by more recent events.

“It began with gamergate,” Kate says, reflecting on the 2014 controversy, in which female fans, gamers and critics faced an organised campaign of online harassment on social media, with a common theme that female fans should ‘prove’ their knowledge of science fiction to be accepted into the fan community. “Misogynistic discourse on ‘women’s place’ in geek culture exploded, instituting a set of claims that women in fan cultures were primarily ‘fake geek girls.’”

Kate then began investigating women’s participation in earlier science fiction fandoms (such as the 1967 television show Star Trek) and digital convergence cultures (such as Tumblr, Archive of Our Own), seeking to trace the influence of femme-fans’ participation in science fiction communities. She found that in the 1950’s women were facing sexist narratives similar to those faced by the victims of gamergate. Kate continues: “Not only did they have to ‘prove’ that they were more than just a writer’s wife or family member, but they also engaged in complex critiques of science and technological change.”

“I hope that these investigations can help provide a sense of belonging for marginalized folks within fan communities.”

Kate’s tracing of femme-fans’ engagement in fan activities has revealed that many of our current fandom related practices we engage in today can be attributed to femme fans. “They worked to edit and self-publish fan-magazines that critiqued professionally published science fiction media which often led these women to become professional editors and writers in their own right.” The dedication of femme-fans provides an inspiring insight into fan culture throughout the 20th century. Reflecting on the wider impact of her work, Kate says: “I hope that these investigations can help provide a sense of belonging for marginalized folks within fan communities.”

Kate is keen to note that her research would not have been possible without the support of a community of scholars whose interest in her work has led to this achievement. Reflecting on her research journey, she singles out John Wills, Professor Charlotte Sleigh, Dr Paul March-Russel, Dr Andrew Butler, Dr Amy Chambers and Dr Sam Robinson as invaluable resources to her success at Kent. “Their knowledge on the history of science fiction, fan cultures and STS (science and technology studies) has strengthened my framework for pursuing this scholarship.” She also expresses her gratitude for the support she has received from Kent which last year enabled her to access primary sources at the University of Liverpool’s Special Collections, which holds the Science Fiction Foundation Archive, aided by curators Dr Phoenix Alexander and Robyn Orr.

To celebrate Women’s History Month, Kate will be giving a lecture on her research to the University of Kent History Society on Wednesday 16 March in EL2 80.