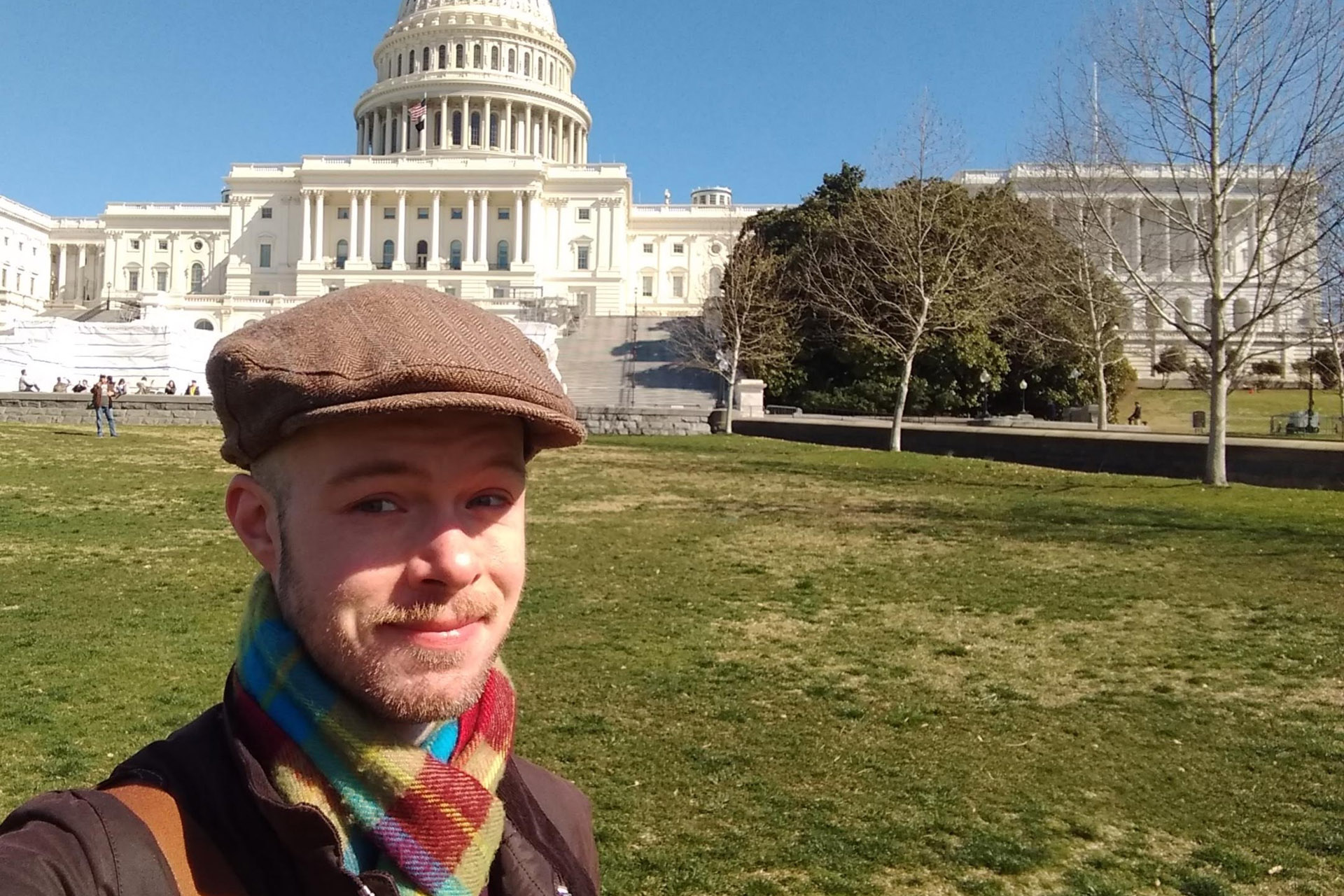 Congratulations to PhD graduand, Michael Docherty, who has recently secured a postdoc position at the University of Innsbruck. We recently caught up with Michael to find out more about his time at Kent and advice for prospective students.

Where did you study prior to Kent?

I did my BA (in English Language and Literature) at Oxford. I finished that way back in 2011, then entered the workplace. After persevering for a few years in jobs that didn’t ignite my passions I knew I wanted to go back to academic work, and in 2015 I enrolled on the MA in English and American Literature at Kent. I did so with the intention of going on to the PhD.

Why did you decide to undertake your PhD at the Centre for American Studies at Kent?

During my MA year I approached Dr Will Norman as a potential PhD supervisor. When choosing my MA course, I’d already identified Dr Norman as someone I thought I’d like to work with at PhD level, and that was a big part of my decision to come to the University of Kent. Originally I’d assumed I would do my PhD within the School of English – back then I didn’t really have a clear sense of what ‘American Studies’ was as a distinct discipline.

It was Dr Norman who suggested doing the PhD at the Centre for American Studies (he was Director of the Centre at the time). He, very perceptively, noted the interdisciplinary qualities of the work I wanted to do: although I’m primarily a literary scholar I’m also very much interested in questions about history, geography, and popular culture, and I wanted my PhD to synthesise those interests. Dr Norman made a strong case that the Centre would be the best research environment to support my interdisciplinary approach, and I’m glad I took up his suggestion.

I’ve really benefited from being able to draw upon the sheer breadth of expertise and knowledge held by the Centre’s academic staff. I’m sure I could’ve written my thesis as an ‘English’ PhD, but doing it at the Centre really helped me to think consciously about what kind of interdisciplinary Americanist scholar I wanted to be—and the thesis was better for it.

Could you please tell us a little bit about your PhD research?

My PhD was on legacies of the American frontier in the fiction of mid-twentieth century Los Angeles. Critics have long held that Californian fiction of this period can be understood as expressing anxieties about the frontier’s closure some decades previously. In conventional readings, though, these texts are about the ‘tragedy’ of a frontierless America—a land that has run out of space and possibility. I took the opposite tack. I argued that although this literature is certainly tragic its tragedy arises not from any inability to sustain the frontier but from the fact that the frontier simply won’t go away. It becomes an insidious mode of thought and a governing logic for dividing multiethnic American life. I located the frontier within urban modernity by examining how spaces that recurred throughout LA’s mid-century fiction were figured as liminal zones of race, gender, and class conflict in ways strongly evocative of contemporary popular and scholarly notions of what the frontier had been. I did this by looking at texts by Raymond Chandler, John Fante, Chester Himes, Dorothy B. Hughes, Hisaye Yamamoto and others.

Congratulations on your postdoc position! What will you be undertaking research on?

Working in the Department of American Studies at the University of Innsbruck, I’ll be continuing my work on California, broadening my scope out beyond Los Angeles and looking at some questions of regional literary production and reception history. I’ll also be exploring a secondary project on masculinity in American fiction. Besides my research, I’ll be teaching various courses on American literature and culture.

What would be your advice for someone who is thinking about applying for a PhD programme?

Sadly, the academic job market isn’t getting any better, either in the UK or abroad. The kind of contribution to knowledge you can make through a PhD has tremendous value in and of itself, and I’d never suggest that the scarcity of academic jobs is a reason not to undertake a doctorate. If you think you have something important to say, or an important question to ask—go for it. If, however, you’re thinking about applying for PhD programmes because you want to go into academia professionally, you need to take a very clear-eyed look at the realities of the market. You need to ask yourself how you will feel, and what you will do, if there isn’t a job at the end of the PhD, or if the only jobs available are short term and precarious.