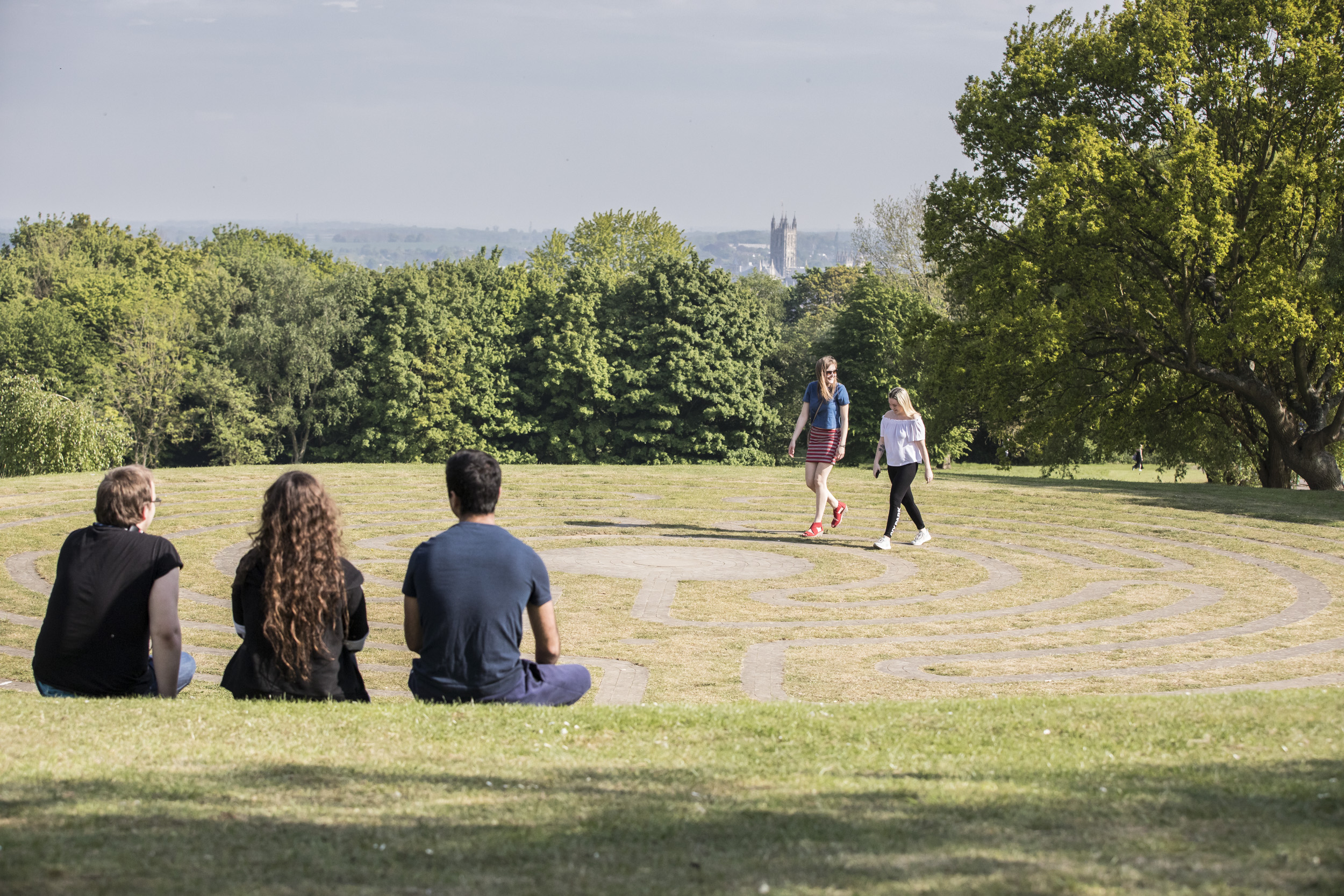 There are many benefits to choosing to live in a room on campus, we asked four of our current Canterbury students during one of our recent applicant live Q&As to share their insights and experiences about living on campus and why they chose to return rather than live off-campus in private accommodation.

Why did you choose to live on campus?

Klaudia: I chose Kent because of the lovely campus and the course here was the best for me, and I chose Darwin College because it was close to everything on the main campus.

I wanted to live on campus because I could be in the centre of university life and be close to everything. I really am close to the library, and I live with other students which was important to me as an international student so that I could meet other people. Here I share a kitchen, and we have a large table where all eight of us can sit around and talk, it’s really nice.

Dhvni: I’ve lived in Park Wood for all three years I’ve been at uni, I like it a lot. It’s just the convenience of it all. I study Maths so the Sibson building is the closest, plus the Co-Op and it’s a bit greener here than elsewhere.

Pratigya: I agree, but I’ve also lived in Darwin College too and I’d really recommend both. The kitchens in Darwin are very big and there’s loads of storage, and in my room I had a super nice view because I was at the top and right outside the rose garden.

Evangelia: Most of the students live in Park Wood, but I also lived in Darwin in my first year, then in private accommodation (off campus) in my second year and then came back on campus just because it is so much more convenient. It’s so easy, I just get up in the morning and it’s a five minute walk – I don’t have to take the bus, I don’t have to rush, and even if I wake up last minute I can still be in class. Also, it’s very nice because everything is included in the price rather than going into a private accommodation and having to deal with bills, gas, electricity, the Wi-Fi. It’s so much more stress free as you avoid the hassle of having to look for private accommodation off-campus much earlier. Dhvni: I’ve had friends that live in part-catered rooms and they’ve said there are pros and cons to both options. There is a social aspect to part-catered, they said it was really nice for Saturday morning brunch following a social on Friday when you can all eat breakfast together, and during exam time it was helpful to have the food cooked for you and to have nutritious food during exam times when everyone’s too stressed to cook!

Evangelia: Right now, as I’m going through the deadline season of my final year, I would love to be in a part-catered accommodation! I wouldn’t have to worry about grocery shopping or cooking! But, it’s also the other social aspect of meeting and catching up with your housemates in the kitchen in the morning and not having that as their kitchens are much smaller than ours in self-catered accommodation.

So, was there anything they disliked about living on campus?

Klaudia: It’s not really a dislike, but if I could choose accommodation not based on price then I would pick Tyler Court because it’s the nicest that I’ve lived in. It’s because it’s an en-suite that makes it more expensive.

(Remember: as a general rule, the more people share toilet/shower facilities the lower the cost of the room. This means Tyler Court like its fellow en-suite options will be more expensive than the neighbouring Darwin College, which offers shared shower/toilet facilities between 5 people, where Klaudia’s lived or Park Wood Houses, which offer 5 housemates sharing one shower and two toilets or 6 housemates sharing two showers and two toilets, where Evangelia, Dhvni and Pratigya live.)

Evangelia: Personally, what I dislike, I mean it’s nice living with five people because you can socialise immediately, but sometimes it might be the case that you don’t get along with one of your housemates. But somehow you manage to get along, and you all share the same things so you might not have the privacy you’d have if you lived by yourself. But I do believe that in the three years you are at uni you are better to go through that experience in order to live the full university life and experience because you will have that later in life to be free and live in your own place to be free and not live with other people.

Have you lived off-campus? Any advice?

Essentially where you want to live will depend on the lifestyle you want and what facilities you value says Dhvni before Pratigya continues;

Pratigya: We’ve lived on campus for all three years, so we don’t have any personal experience but some of our friends have. The top tip is to apply early, there are a lot of options in town, but usually, students start looking in December.

Dhvni: Just do a lot of research into the area if you want to live off-campus because you want to make sure it’s safe as that’s one of the main worries of students, so just check and read the contract with your landlord.

Evangelia: Yes, you have to start looking early. I applied with my housemates from the first year for off-campus accommodation. We found a few we liked and we had to do the viewings, and it was really early on in the year – it was around November and by January most of the good places had gone for the next year. For sure read your contract before signing! That’s very important – I didn’t and then I got in trouble, but I would also advise to find an accommodation that has all the bills included to avoid any unexpected costs you haven’t budgeted for.

Want to hear more? We regularly host Live Q&A’s with staff and current students at our Open and Applicant Days so book on to learn more.

As a university of two campuses it only makes sense for this to be a blog of two halves as well, so if your course takes place on the Medway campus, be sure to check out the second part where Rebecca and Yemurai share their experiences living in Pier Quays.